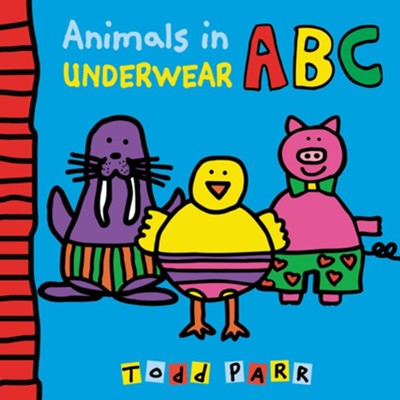 ▼▲
From alligator to zebra - with a goldfish, iguana, yak, and even a unicorn in between - there's no better way to learn the alphabet than with animals... in underwear!

Todd Parr's signature kid-friendly illustrations and bold colors showcase an array of animals in all kinds of hilarious underwear styles, making learning the alphabet tons of fun. Featuring a padded cover and gate folds on every spread, here's a playful, silly way for kids to learn their ABCs!

▼▲
Todd Parr has inspired and empowered children around the world with his bold images and positive messages. He is the bestselling author of more than forty books, including The Goodbye Book, The Family Book, The I Love You Book, and It's Okay to be Different. He lives in Berkeley, California.

▼▲
I'm the author/artist and I want to review Animals in Underwear ABC.
Back
×