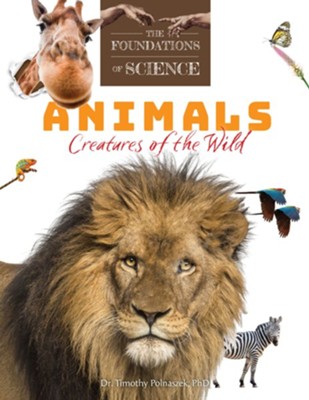 Animals: Creatures of the Wild

▼▲
The Foundations of Science introduces children to the wonders of the natural world in light of God’s providential care over creation.

Too often we hear messages that science is in conflict with faith, but Pope St. John Paul II wrote that faith and science "each can draw the other into a wider world, a world in which both can flourish." Foundations seek to spawn this flourishing in the hearts and minds of young readers, guiding them into a world that will delight their imaginations and inspire awe in the awesome power of God.

Authored by Dr. Timothy Polnaszek, this eight-part series covers an extensive scope of scientific studies, from animals and plants, to the galaxies of outer space and the depths of the ocean, to cells and organisms, to the curiosities of chemistry and the marvels of our planet. Still more, it reveals the intricate order found beneath the surface of creation and chronicles many of the Church’s contributions to science throughout history.

Animals: Creatures of the Wild offers a tour of the animal kingdom and the habitats in which mammals, birds, amphibians, reptiles, insects, and fish live and thrive. Children will discover how animals find and hunt for food, how and why they live in concert with other animals, why they migrate or hibernate, and more.

Did you know . . . In addition, children will also learn about St. Francis, the patron saint of animals, the story of St. Brendan and the whales and St. Modomnoc and the bees, the serpent from Genesis, and how the Church teaches that our care for animals can bring us closer to God.

Take a journey back to when God laid the foundation of the world with this groundbreaking science curriculum!

▼▲
I'm the author/artist and I want to review Animals: Creatures of the Wild.
Back