Skip to main content
Animals Are Not Ours (No, Really, They're Not)
By: Sarah Withrow King
Stock No: WW201807 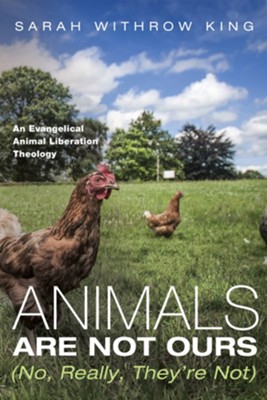 Animals Are Not Ours (No, Really, They're Not)

▼▲
Why should Christians care about animals? Is there a biblical basis for abstaining from eating animals? Is avoiding companies that use (and misuse) animals a viable way for Christians to better live out the message of God? In Animals Are Not Ours, Sarah Withrow King makes the argument that care for all of creation is no ""far-fetched"" idea that only radical people would consider, but rather a faithful witness of the peaceful kingdom God desires and Jesus modeled. This includes all living and breathing creatures that share this earth with us. King uses her decade-plus experience as a vegan, her seminary education, her evangelical Christian faith, and her years working with PETA to call Christians to examine how we treat and view the nonhuman animals with whom we share a finite planet. ""A sparky, accessible, and insightful book. Difficult not to be moved by the spiritual journey it relates."" --Andrew Linzey, director of the Oxford Centre for Animal Ethics and author of Animal Theology ""Animals Are Not Ours is riveting and convicting. A major contribution to the neglected topic of animal liberation and animal rights, from an exciting new voice, this book is essential reading for all Christians."" --David P. Gushee, Distinguished University Professor of Christian Ethics; Director, Center for Theology and Public Life, Mercer University ""In Animals Are Not Ours (No, Really, They're Not), Sarah Withrow King challenges us to look again at texts that may feel familiar, but only because we've read them a thousand times from the same perspective. But what if we change perspective? What if the biblical writers and the people they wrote about didn't see the world as we see it? What if those writers and people were not western, linear, dualistic thinkers who saw people as separate from creation, but rather as part of it. What if God cares deeply for the entire community of creation? If so, then Withrow King's book is a gift to us all, offering one of the most comprehensive examinations of God's treatment of animals (and fauna) that I have ever seen. And as the title hints--she has fun doing it. Animals Are Not Ours is a great and important read."" --Lisa Sharon Harper, author of The Very Good Gospel: How Everything Wrong can be Made Right Sarah Withrow King is Deputy Director of the Sider Center at Eastern University, and an associate fellow of the Oxford Centre for Animal Ethics. In her spare time, she enjoys drinking too much coffee and reading Calvin and Hobbes with her son. She and her family live in Philadelphia, Pennsylvania, and are covenant members of Circle of Hope.

▼▲
I'm the author/artist and I want to review Animals Are Not Ours (No, Really, They're Not).
Back