Skip to main content
BLACK FRIDAY: Thousands of Deals ~ Up to 85% Off Through 11/28. Shop Now >
Animal Wise: How We Know Animals Think and Feel
By: Virginia Morell
Stock No: WW461451 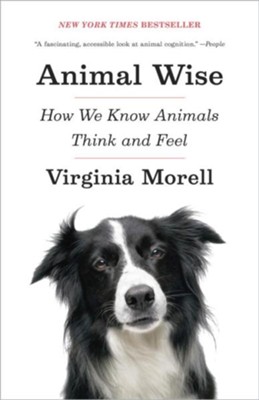 Animal Wise: How We Know Animals Think and Feel

▼▲
Animal Wise: How We Know Animals Think and Feel by Virginia Morell, Have you ever wondered what is was like to be a fish, or a parrot, or elephant? The author uses her storytelling gift, to transport us to field sites and laboratories around the world, to introduce us to animal-cognition scientists and their intelligent and sensitive subjects. It is there that they discover answers to many questions humans have had about the animal kingdom. Scientists know that ants teach, dogs have thousand-word vocabularies, and birds practice their songs in their sleep. How do scientists know these things? Read along and find out. Paperback , 304 pages. Ages 6 to 9 years old.

▼▲
The New York Times Bestseller that explores animal intelligence and will alter the way we as humans view other species.

Have you ever wondered what it is like to be a fish? Or a parrot, dolphin, or an elephant?  Do they experience thoughts that are similar to ours, or have feelings of grief and love? These are tough questions, but scientists are answering them. They know that ants teach and rats love to be tickled. They’ve discovered that dogs have thousand-word vocabularies and that birds practice their songs in their sleep. But how do scientists know these things?

Animal Wise takes us on a dazzling odyssey into the inner world of animals and among the pioneering researchers who are leading the way into once-uncharted territory: the animal mind. Morell uses her formidable gifts as a storyteller to transport us to field sites and laboratories around the world, introducing us to animal-cognition scientists and their surprisingly intelligent and sensitive subjects. She explores how this rapidly evolving, controversial field has only recently overturned old notions about why animals behave as they do. In this surprising and moving book, Morell brings the world of nature brilliantly alive in a nuanced, deeply felt appreciation of the human-animal bond.

▼▲
VIRGINIA MORELL is a prolific contributor to National Geographic, Science, and Smithsonian, among other publications. She is also the author of Ancestral Passions, a New York Times Notable Book of the Year; Blue Nile; and coauthor with Richard Leakey of Wildlife Wars.

"This enthralling book might change the way we perceive other species who share the planet with us&hellip;.A compelling read." —Bark magazine

"This charming book about animal intelligence&hellip;.has a nice arc to its structure—working from generally more basic (although still remarkable) cognitive abilities of creatures like adventurous ants to the complex thinking of chimps—and it is threaded through with philosophical questions that are as thought-provoking as the creatures and experiments she chronicles." —Smithsonian magazine

"For most of the 20th Century, animals weren’t allowed to have emotions&hellip;But Virginia Morell’s new book, Animal Wise, tells a new story. After six years of reporting in 11 different countries, the longtime science journalist is pretty certain: Animals feel. And strongly, as it turns out." —Wired

"Each chapter takes readers on an adventure alongside researchers as they probe the minds of such disparate creatures as ants, trout, dolphins, elephants and chimpanzees." —Scientific American

"Virginia Morell sheds light on the many surprises of cognitive awareness of animals." —San Francisco Chronicle

"For page after exciting page, [Morell] shows [animals] making decisions, remembering the past, planning the future, and helping others in distress&hellip;.She resists the urge to close her fine book with musings on what makes humans special. Bravo. It’s humbler, wiser, and more instructive to stop looking down at animals from an imaginary evolutionary pinnacle and, instead, to try to see them as fellow thinking, feeling beings with minds as worthy of understanding as our own." —Sy Montgomery, American Scholar

"Heart- and brain-stirring...An unprecedented tour....about what goes on in the hearts and minds of our fellow beings, from the laughter of rats to the intellectual curiosity of dolphins." —Maria Popova, Brain Pickings

"Moving and entertaining&hellip;.[Morell] takes a journalist’s approach to the question of animal minds, but shows a deep compassion and empathy for her subjects, which include species separated by some 100 million years of evolution&hellip;.[She] obliterates the lines that might separate us from the rest of the animal kingdom by relating trailblazing discoveries of the emotional and intellectual lives of animals. In the process, she challenges us to rethink our ethical obligations to the creatures who share our world." —KQED.org

"There aren’t enough words in the English language to do justice to Animal Wise... This remarkable book by Virginia Morell is transcendent... Readers will be dazzled by the profound insights being gained through scientific study." —Examiner.com

"Each chapter presents some fascinating and surprising observations&hellip;. [Animal Wise] is a good read; it is entertaining and thought-provoking." —Tucson Citizen

"Thank goodness for sensitive and compassionate writers like Virginia Morell&hellip;.She has written a stunning volume charting the latest research on wild and domestic animal cognition and emotions." —Spirituality and Practice

"Animal Wise brings up a lot of important questions. I would recommend [it] for anyone who cares about animals, not only for the wonders it reveals but for the chance it offers to make a difference in their lives." —EcoLit Books

"Morell passionately and consistently proves her point in this frequently fascinating study of animal behavior&hellip;. [She] is a gifted writer with a deep knowledge base that never talks down to the reader or the academic community—no small feat."
—Publishers Weekly (starred review)

"A delightful exploration of how animals think&hellip;.Morell makes a fascinating, convincing case that even primitive animals give some thought to their actions."
—Kirkus Reviews (starred review)

"After you read this book, you will be convinced that many different animal species have true thoughts and emotions.  You will take a journey to the center of the animal mind." —Temple Grandin, author of Animals in Translation and Animals Make Us Human

"From real-estate appraising ants and wife-beating parrots to laughing rats, grieving elephants, and dogs that play Simon Says, Virginia Morell’s Animal Wise is a fascinating and intellectually sweeping overview of the new science of animal cognition.  With Morell’s unusual ability to capture the passion and humanity of these scientists, this extraordinary book is an impressive treatment of animal minds and a must read for anyone who has ever wondered what is going on in the heads of the creatures we share our world with." —Hal Herzog, author of Some We Love, Some We Hate, Some We Eat

"Why is it that until very recently, many scientists claimed that animals can’t think?  Every pet owner knows better, and Virginia Morell is our champion.  But she’s not going on guesswork and opinion – Animal Wise is thoroughly and meticulously researched.  And it’s a page-turner – a window to the natural world that will change the way we view other species.  We place ourselves at the top of the evolutionary ladder.  Of course we do.  We invented the ladder.  In her marvelous book, Morell displays the folly of this viewpoint.  Animal Wise is fabulous!" —Elizabeth Marshall Thomas, author of The Hidden Life of Dogs

"Morell’s Animal Wise is science writing at its best.  Here she not only translates scientists’ jargon and data into enviable prose, but transmits her love of the field to her audience.  Novice readers will be enthralled to learn about the intelligence of the creatures in this book, and experts will be extremely pleased to see how she makes their work and that of their colleagues accessible to everyone." —Irene Pepperberg, author of Alex & Me

"From chimpanzees playing computer games to amorous dolphins, Virginia Morell takes us on a lively tour of what we have learned about the emotions and intelligence of animals.  By inviting scientists to tell their personal side of the story, she not only brings the animals closer but also the thrill of discovery." —Frans de Waal, author of The Age of Empathy

"These animals have incredible minds.  Now thanks to Morell they have a voice.  I love this book.  It makes me even prouder to share this Earth with our non-human kin." —Jennifer S. Holland, author of Unlikely Friendships

"Anyone who reads this book will be changed forever in their view of life on earth." —Richard E. Leakey, FRS, Stony Brook Professor of Anthropology and author of The Sixth Extinction

"The scientific expertise Virginia Morell provides to this very important subject, and the way she ties this in with the researchers who know their animals – because knowing them is their life work – make this an important book and a great read."
—Bernd Heinrich, author of Life Everlasting

"Animal Wise brings the reader into the lab and field to learn firsthand from the scientists that marvel over the minds of other animals.  Using the sharp pen of an investigative reporter, Morell exposes the expected brilliance of apes, dolphins, and parrots, but also surprises us with simple discoveries of genius among fishes and ants, and even laughter among rats.  Each page allows you to anticipate, sweat, grieve, and celebrate with dedicated scientists as you discover and experience their worlds, and those within the minds of the astounding animals that they study.  Your journey causes reflection; a consideration of how we treat other species and what they think about us." —John Marzluff, Professor of Wildlife Science, University of Washington and author of Dog Days, Raven Nights and Gifts of the Crow

"Animal Wise is a thought-provoking and highly engaging set of essays that captures the changing views of scientists toward the minds and emotional lives of animals. It is sure to have broad impact on attitudes towards other species and our treatment of them. Thank you, Virginia Morell, for adding legitimacy to what we have so painstakingly observed." —Joyce Poole, PhD, Co-Director of ElephantVoices, member of the Amboseli Elephant Research Project, and author of Coming of Age With Elephants

"In sprightly and clear prose Virginia Morell enters the world of animals with respect and insight and with the compelling argument that our lives differ only in degree.  The recognition that we are bound in mind to many other creatures, all of them dependent on us for survival, will, I hope, arouse our compassion and assure them a future.  This is a fascinating, timely, and important book." —George B. Schaller, Panthera and Wildlife Conservation Society

"From ants to apes, Animal Wise covers wide-ranging scientific research on the cognitive and emotional capacities of many different non-human animals.  Noted author Virginia Morell writes clearly and concisely, and this easy read will surely be good for animals because we must use what we know about them to make their lives better in an increasingly human dominated world." —Marc Bekoff, author of The Emotional Lives of Animals and The Animal Manifesto and editor of Ignoring Nature No More

"It is nice to see a science writer of Virginia Morell’s distinction take on this increasingly important topic, and it is good to have her calm and careful voice added to the conversation.  She has a great deal to teach us about the latest research on the frontiers of this fascinating new world.  Animal Wise is a fine book." —Jeffrey Masson, author of When Elephants Weep

▼▲
I'm the author/artist and I want to review Animal Wise: How We Know Animals Think and Feel.
Back