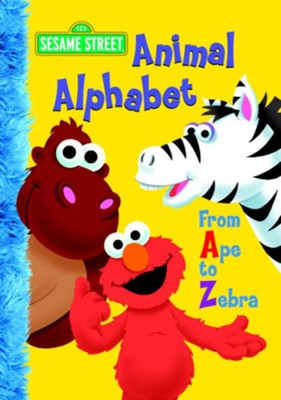 ▼▲
Elmo and Ernie take a trip through the alphabet by introducing a menagerie of animals, one for each of the 26 letters, with illustrations in a bright, graphic cut-paper style.
These sturdy board books with padded covers are the perfect small size for young children yet big enough to offer plenty of room on the pages for engaging texts and illustrations.

▼▲
Established in July 2013 in a merger between Penguin and Random House, Penguin Random House, with nearly 250 independent imprints and brands on five continents, more than 15,000 new titles published each year, and close to 800 million print, audio, and eBooks sold annually, is the world’s leading trade book publisher. Like its predecessor companies, Penguin Random House is committed to publishing adult and children’s fiction and nonfiction print editions and is a pioneer in digital publishing. Its publishing lists include more than 60 Nobel Prize laureates and hundreds of the world’s most widely read authors.

▼▲
I'm the author/artist and I want to review Animal Alphabet.
Back