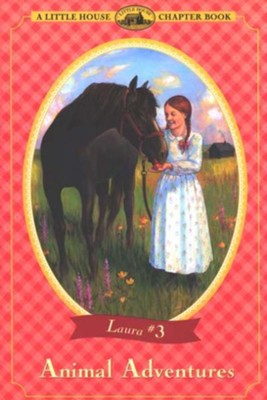 ▼▲
Laura Ingalls and her family were always surrounded by wild animals. From bears and deer to badgers and panthers, Laura always managed to find herself caught up in some kind of adventure! Gentle adaptations of Laura Ingalls Wilder's original Little House books invite beginning chapter-book readers into the magical world of Little House. Recommended for ages 7 to 10.

In the unsettled West, Laura Ingalls and her family are surrounded by wild animals. From bears and deer to badgers and panthers, Laura always manages to fingd herself cought up in an animal adventure?

Laura Ingalls Wilder's nine original Little House books have been read and cherished by millions of readers. Gentle adaptations of these celebrated stories have been gathered together here in Little House Chapter Books.
No matter where Laura and her family settled, they were always surrounded by all sorts of wild animals -- from bears and deer to badgers and even panthers. It's one animal adventure after another for Laura in Animal Adventures!
With simple, captivating text and Renée Graef's breath-taking artwork created in the style of Garth Williams, Little House Chapter Books are the perfect way to introduce beginning chapter book readers to the exciting world of Little House.

Laura Ingalls Wilder was born in 1867 in the log cabin described in Little House in the Big Woods. She and her family traveled by covered wagon across the Midwest. Later, Laura and her husband, Almanzo Wilder, made their own covered-wagon trip with their daughter, Rose, to Mansfield, Missouri. There, believing in the importance of knowing where you began in order to appreciate how far you've come, Laura wrote about her childhood growing up on the American frontier. For millions of readers Laura lives on forever as the little pioneer girl in the beloved Little House books.

▼▲
I'm the author/artist and I want to review Animal Adventures, Little House Chapter Book Series #3.
Back
Back