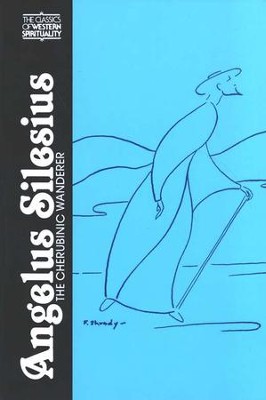 ▼▲
Johann Scheffler was born in 1624 to Protestant parents int he Silesian capital of Breslau, seven years after the Thirty Years' War had begun unsettling Europe. At the age of 29, after graduating from the University of Padua, he converted to Catholicism and took the name Angelus. Although he pursued a career as an energetic and sometimes vitriolic apologist, it was his poetry that won him a place of importance in the mystical literature of the West. By the mid-seventeenth century the epigram had become the most widely used form for German baroque poetry.
The Cherubinic Wandered over the decades has become an intergral part of German religious folk literature. Admirers such as Friedrich Schlegel in the past century and Hans Urs von Balthasar and Umberto Eco in our own day have prized the work for its power, its immediacy, and its beauty of expression.

▼▲
Here are poetic texts by one of the great German mystics of the 17th century, Angelus Silesius (1624-1677). These texts, written in the form of the epigram, are still used today for contemplative prayer and as part of German Christmas folklore.

▼▲
I'm the author/artist and I want to review Angelus Silesius: The Cherubic Wanderer.
Back
Back