Skip to main content
Angels (and Demons): What Do We Really Know About Them?
By: Peter Kreeft
Stock No: WW05509 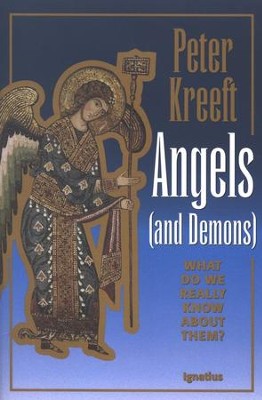 Angels (and Demons): What Do We Really Know About Them?

▼▲
Apologist Peter Kreeft has heard a lot of questions about angels. He has compiled his answers, drawn from the Bible, traditional church teaching, and the philosophy of Thomas Aquinas, to 100 of those questions into Angels (and Demons): What Do We Really Know About Them?. It is a fascinating look at the reality of the supernatural beings that can and do interact with each other, God, and humans.

Kreeft starts with the assumption that angels (and demons) are indeed real beings. Our ideas about angels and demons, however, are not always accurate. Kreeft attempts to separate fact from fiction and myth from reality by looking to the Bible, church tradition, Thomistic philosophy, and his own experience. The result is an engaging and interesting look at angels and demons. The book is organized by question into themes like the cultural fascination with angels, how we know what we know about angels, the nature of angels, and the nature of demons. There are also several appendices looking at angels in philosophy, angels in the Bible, and angels in the catechism of the Catholic Church.

Odds are, if you have a question about angels or demons, it is included in this book. Questions range from the nature of angels, and what they are made of to where they live and how they fill their days. Also included, questions about interactions between angels, demons and humans, and the impact that angels and demons can have on our world. An eye-opening book, Angels (and Demons) is likely to cause controversy, but it will, at the very least, get you to think about angels and demons, which is not a bad thing.

▼▲
I'm the author/artist and I want to review Angels (and Demons): What Do We Really Know About Them?.
Back
Back