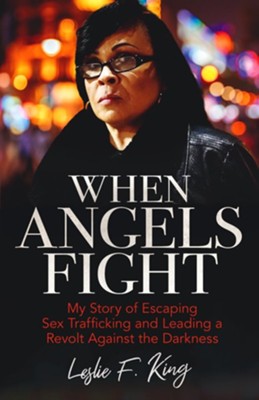 When Angels Fight: My Story of Escaping Sex Trafficking and Leading a Revolt

The incredible story of a woman called by God to save herself and others from trafficking-and how you can join the fight.

When she was fifteen years old, Leslie King ran away from an abusive home, looking for a better life and longing for real love. What she found instead was a man who wooed her just long enough to trap her in a life of prostitution. She became one of the many thousands of trafficked individuals in the United States today, a number that continues to rise-in the biggest cities and in the most idyllic towns.As is true for so many in similar situations, life was nothing but brokenness and pain for Leslie. After years of hopelessness, she finally decided to take her own life. And then God spoke. With his promise that he was with her and had mighty things for her to accomplish ringing in her ears, she got off the streets, got clean, and got to work on the mission to which he'd called her.

Now Leslie is a passionate and heroic advocate for other trafficked women and teenage girls in her community and across the country. And her ministry, Sacred Beginnings, provides housing and help for sex workers leaving the streets. In fact, Leslie herself walks directly into the night to bring them hope.and bring them home.

More than a gritty, no-holds-barred deliverance story, When Angels Fight includes powerful advice from Leslie and those she's encountered over the years-police officers, judges, and other advocates and organizations. They share what indicators to look for, what needs to change in the systems that prosecute and punish the exploited, and how Leslie herself has begun to transform hearts and minds in law enforcement. She also encourages readers to do what they can to make a real difference in their own communities. Her call from God included marshaling others to the cause to stride right alongside her and the angels who fight for God's children-and Leslie won't back down.

Leslie F. King is the founder of Sacred Beginnings, an organization in Grand Rapids, Michigan, that takes in former sex workers, supporting them in addiction counseling, job training, and community building. She is an activist for trafficked and jailed women across the country, including high-profile cases of women who've killed their abusers in self-defense. Leslie has appeared on The Today Show, on other news programs, in courtrooms, and in front of many community organizations and churches to tell her story. This is her first book.

▼▲
I'm the author/artist and I want to review When Angels Fight: My Story of Escaping Sex Trafficking and Leading a Revolt.
Back
Back