We are OPEN and SHIPPING - click here for shipping estimates
PRE-SUMMER CYBER SALE EXTENDED thru 6/1 ~ Over 2,500 items up to 90% off
Angels Hear What the Spirit Is Saying to the Seven Churches Revelation 1-3
By: Gary T. Pierce 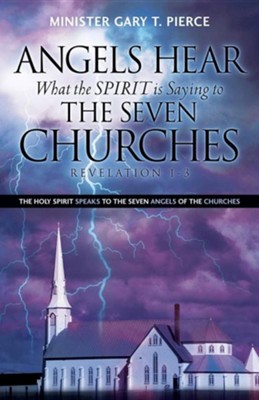 ▼▲
Only God, and his Son Jesus Christ understands how long I have been waiting to deliver this message to the world. Of course it was because of fear, and doubt that it took me so long to do this book, but the Lord God, with the help of his Holy Spirit has removed that fear, and doubt, and has given me the courage, knowledge, and wisdom to come up with a way to deliver this to the people. I no longer have any doubt that the understanding given to me about this "end times" message to seven churches, and seven angels pertain to our time, but I also ask that if I'm wrong, that God corrects it, not man. The only difference that could possible separate these messages to the churches to our time is the names that John uses to describe the churches, but that was all he knew. I was born Gary Tyrone Pierce to the union of Robert & Shirley Pierce on Jan 25, 1960 in Hayti, Mo in front of a Jewish doctor's office, delivered by my grandmother, born with a veil (thin skin layer) on my face. I graduated from high school in Aurora, IL where I was raised. I attended Waubonsee Community College where I received my A.A. degree in Political Science in 1984. I graduated from MacMurray College with a Bachelor's in Social Work in 2004. Founded Key of David Ministries in November 2001 in which I'm Pastor/Director with outreach programs, helping the homeless, ex-offenders, also a local television program with my wife Shari. Received my first call in 1983 in which I was like Jonah running from it, but finally the Lord God gave me another chance in 1999, in which both calls were received in the same month of October.

▼▲
I'm the author/artist and I want to review Angels Hear What the Spirit Is Saying to the Seven Churches Revelation 1-3.
Back
×