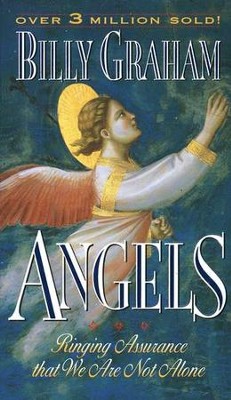 ▼▲
There has never been a time like the present when the subject of angels has created so much interest and attention. Dr. Billy Graham lifts the veil between the visible and the invisible world to give us an eye-opening account of these behind-the-scenes agents. This best-selling classic records the experiences of Dr. Graham and others who are convinced that at moments of special need they have been attended by angels. With keen insight and conviction, Dr. Graham affirms that: angels "think, feel, will, and display emotions" and at death, the faithful will be ushered by angels into the presence of God.

This best-selling personal and biblical investigation of spiritual beings records the experiences of Dr. Billy Graham and others who are convinced that at moments of special need they have been attended by angels.

Interest in angels, demons, heaven, and hell—as well as the occult—is still gaining ground. Even in secular culture, science and empirical evidence doesn't hold the same influence it once did, and many people admit to believing in powers beyond their ability to see and understand.

But for the Christian, it's important that we learn to distinguish between fact and fiction, while still maintaining our faith in the spiritual world and improving our openness to God's supernatural work and host. With insight, conviction, and biblical acumen, Billy Graham explores the answers to questions such as:

In Angels, Dr. Billy Graham will lift the veil between the visible and the invisible world to give you an eye-opening account of these behind-the-scenes spiritual agents. Angels are real. They are not the product of your imagination.

"If we had open spiritual eyes we would see not only a world filled with evil spirits and powers?but also powerful angels with drawn swords, set for our defense." ?Billy Graham

Billy Graham (1918–2018), world-renowned preacher, evangelist, and author, delivered the Gospel message to more people face-to-face than anyone in history and ministered on every continent of the world in almost 200 countries and territories. His ministry extended far beyond stadiums and arenas, utilizing radio, television, film, print media, wireless communications, and thirty-three books, all that still carry the Good News of God's redemptive love for mankind. Engraved on a simple fieldstone in the Memorial Prayer Garden where he is buried at the Billy Graham Library in Charlotte, North Carolina, these words exemplify how the man and the minister wished to be remembered: "Preacher of the Gospel of the Lord Jesus Christ."

Q: Are there questions at the end of the chapters or a study guide to accompany?

No, the book doesn't feature study questions, nor is a study guide available.

▼▲
I'm the author/artist and I want to review Angels, Revised.
Back
Back