Skip to main content
SPRING CYBER EVENT STARTS NOW: And it's a really BIG deal! Up to 88% off through 5/24>
Angels on Earth - eBook
By: Laura Schroff, Alex Tresniowski
Stock No: WW84443EB 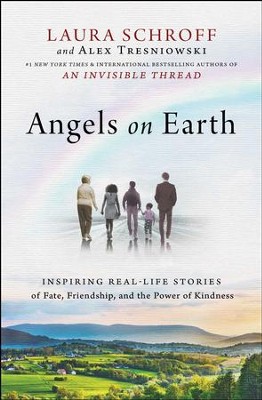 ▼▲
From the #1 New York Times and international bestselling authors of An Invisible Thread comes a heartwarming and inspiring book about the incredible impact that acts of kindness from strangers can have on the world around us.

One day in 1986, Laura Schroff, a busy ad sales executive, passed an eleven-year-old boy panhandling on the street. She stopped and offered to take him to McDonald’s for lunch. Twenty years later, at Laura’s fiftieth birthday party, Maurice Mazyck gave a toast, thanking Laura for her act of kindness, which ended up changing the course of his life. In that toast, Maurice said that when Laura stopped on that busy street corner all those years ago, God had sent him an angel.

Laura’s invisible thread journey has deepened her belief that angels—divine and otherwise—are all around us. After An Invisible Thread was published in 2011, readers from around the country and world began sharing with Laura their own stories about how chance encounters with strangers have changed their lives. From a woman who saved a life simply by buying someone a book, to a financier who gave a stranger the greatest gift of all, to a teacher who chose a hug over discipline and changed a lost boy’s future—Angels on Earth will introduce a series of remarkable people whose invisible thread stories will move, surprise, and inspire readers. Angels on Earth sheds light on how each of us can live happier, more purposeful lives through sharing acts of kindness.

▼▲
Laura Schroff is a former advertising executive who has helped launch three of the most successful start-ups in Time Inc. history—InStyle, Teen People, and People StyleWatch. Schroff has also worked as the New York Division Manager at People magazine and as Associate Publisher at Brides magazine. She lives in New York City. Alex Tresniowski is a former human-interest writer at People and the bestselling author of several books, most notably The Vendetta, which was purchased by Universal Studios and used as a basis for the movie Public Enemies. His other titles include An Invisible Thread, Waking Up In Heaven, and The Light Between Us.

▼▲
This shining book gives us story after story reminding us that God is always near.
"Angels on Earth is a powerful testament to the undeniable truth that there is a great force of love guiding our lives and our connections to one another here on earth.  This book will open your mind and heart to seeing and understanding the profound and powerful soul connections in your own life.  It will inspire you to embrace the knowing that we can all serve as vehicles of God - and be angels on one another's life journey's here on earth.  Reading this book will change how you view your life."

▼▲
I'm the author/artist and I want to review Angels on Earth - eBook.
Back
Back