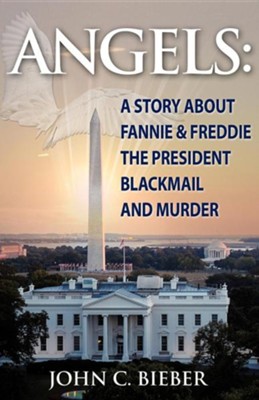 ▼▲
Angels: A Story about Fannie &Freddie, the President, Blackmail and Murder THE NOVEL THAT SAYS GOD IS STILL IN CONTROL... NO MATTER WHO LIVES IN THE WHITE HOUSE Matt Davidson's real estate company is being taken down by the busted housing bubble and the economic crisis of 2009. As a prayerful believer and ordinary family man, Matt has prayed for help to survive the economic downturn and he is given a gift that lets him see into the spiritual world. The gift is the ability to see angels and demons on earth. He can see them in the world, on television and in photography. Matt sees patterns of demonic activity around certain politicians, some more than others. He prays to find out why and for what purpose he has been given this ability. This leads him on a spiritual mission and he is shown where evil forces lie in the highest offices in American government. Matt is used, with the help and protection of angels, to reveal an Iranian plot to control the American presidency. Matt remains faithful and with the help of a fellow believer friend, they go to "seek out" the one who is revealed to him to be at the center of the plan. Fast paced, romantic, political, intense, funny, tender, dark and spiritual. John C. Bieber takes the reader from modern day Valley Forge, to the New Jersey shore, Philadelphia, Washington DC, Paris, Monte Carlo, on board Air Force One, Detroit, Tehran, New York City and into the White House. The momentum builds and builds to a dramatic conclusion. Start reading this book when you have some time, because - You will not be able to put it down

▼▲
I'm the author/artist and I want to review Angels.
Back