Skip to main content
Angels of a Lower Flight: One Woman's Mission to Save a Country . . . One Child at a Time - eBook
By: Susie Krabacher
Stock No: WW8706EB 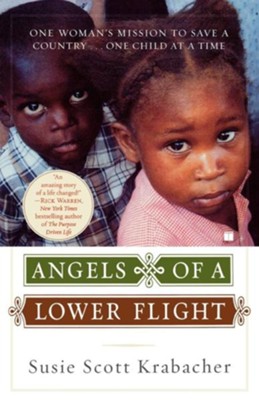 Angels of a Lower Flight: One Woman's Mission to Save a Country . . . One Child at a Time - eBook

▼▲
God can use anyone to share His love with the world. Susie Krabacher's abusive past and troubled youth was redeemed by God's love. A former Playboy Playmate and victim of sexual abuse, God rebuilt her life through a loving marriage. Then in the 1990's she began to share God's love with impoverished children in Haiti. Drawn there by a television ad asking for help, she has since opened three schools, two orphanages, a hospital and a home for abandoned infants. Read her story of compassion and your heart will never be the same. 322 pages, hardcover from Touchstone.

The inspiring story of how one woman's message of hope and opportunity will change the lives of an entire generation.

Three schools, two orphanages, a hospital, and an abandoned-infant home -- constructed in the poorest country in the western hemisphere -- were the result of one quick television commercial. The ad was for a charity, asking for donations to help impoverished children in a third world country. Though author Susie Scott Krabacher had a little money to give, what she wanted was to hold the hand of every child she saw and tell them that they were not forgotten and that they too were important. When Susie called the charity, it wanted only monetary donations -- and every other overseas nonprofit she contacted couldn't or wouldn't take on an inexperienced volunteer. So Susie set out to change the children's lives on her own.

In this heartbreaking and inspiring memoir, Susie Scott Krabacher tells how the pain in her past caused her to doubt if God really loved and protected her. From her abusive childhood to her experiences as a Playboy centerfold during the 1980s, Susie details with frank honesty how she lost her faith along the way and how her experiences helping children in Haiti, an impoverished nation only five hundred miles from Florida, brought God back into her life.

In a country where 10 percent of all children die before the age of four, Susie mounted a brave effort to provide not just charity but opportunity. By treating the children she helps as individuals, Susie gives them the tools to save their own country. Although some of the children she's tirelessly worked to rescue do not survive, Susie will never again lose her faith.

▼▲
Susie Scott Krabacher began traveling to Haiti during the mid-1990s and contributed her own money for schools, hospitals, and humanitarian aid in that country. For her efforts, Susie has been made an honorary Haitian citizen. She also received the Humanitarian Rose Award, presented by the People¹s Princess Foundation, Inc., which was established by Maureen Rorech Dunkel to further Princess Diana¹s commitment to the needy. Susie lives with her husband in Aspen, Colorado.

▼▲
As a child, writes Krabacher, Playboy Playmate and Miss May 1983, I had promised God that if I survived, I would help other kids survive whatever situation they were in. Abused by her family, a school dropout by 15, Krabacher was ripe for the rich and raunchy Playmate life. Her journey from pornography to philanthropy began when she divorced her abusive first husband and married Joe, a loving and supportive lawyer. A 1994 visit to Haiti led her and Joe to start and fund the Mercy and Sharing Foundation, which soon counted more than 1,800 children in its orphanages and schools. Many readers will find Krabacher's good works, perseverance and Christian faith inspirational. Some will be troubled by her lapses in memory and a disquieting sense that she dislikes adults as much as she loves children. Still, Krabacher deserves respect, having drawn unreservedly on her renown and her purse for this charitable endeavor.

▼▲
"This is an inspiring book, filled with hope and faith that conquers despair. Susie Scott Krabacher brings us into her own soul as well as into the tragic orphanages of Haiti. You will be deeply moved by both her life and the situation she exposes." -- Walter Isaacson, author of Einstein
"Susie Krabacher has a twinkle in her eye while tackling the horrors of the world. You can have a destructive childhood and a troubled youth, but instead of disappearing under psychiatric labels and lots of pills, she healed herself by going to Haiti and serving love." -- Patch Adams

▼▲
I'm the author/artist and I want to review Angels of a Lower Flight: One Woman's Mission to Save a Country . . . One Child at a Time - eBook.
Back
Back