Skip to main content
Angels in the Architecture: A Protestant Vision for Middle Earth
By: Douglas Wilson, Douglas Jones
Stock No: WW67404 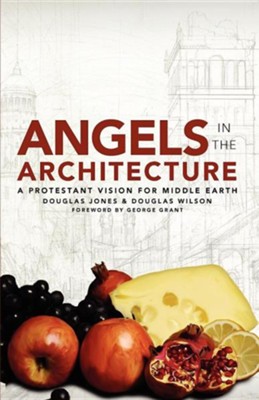 Angels in the Architecture: A Protestant Vision for Middle Earth

▼▲
Angels in the Architecture is a unique contribution, bringing back to a somewhat desiccated and feeble Protestantism a full flagon of the rich wine of god's bountful Creation. The answer to the crass sensuality and self-indulgence of materialism is not to be found only, or chiefly, in the austerity of a hermit's cave and a diet of dry bread and stale water, but in a legitimate and joyful appropriation of beauty, bounty, and a covenant love. This book is an exegesis of what the preacher meant when he wrote" eat thy bread with joy, and drink thy wine with a merry heart; for God now accepteth thy works" (Eccl. 9:7).

▼▲
Christianity presents a glorious vision of culture, a vision overflowing with truth, beauty, and goodness. It's a vision that stands in stark conflict with the anemic modern (and postmodern) perspectives that dominate contemporary life. Medieval Christianity began telling a beautiful story about the good life, but it was silenced in mid-sentence. The Reformation rescued truth, but its modern grandchildren have often ignored the importance of a medieval grasp of the good life. This book sketches a vision of "medieval Protestantism," a personal and cultural vision that embraces the fullness of Christian truth, beauty, and goodness. "This volume is a breath of fresh air in our polluted religious environment. Hopefully many readers will breathe deeply of its contents and be energized." -The Presbyterian Witness " A] delightful apologetic for a Protestant cultural vision. . . . before you write off these two as mere obscurantist Reformed types, take care. I found that some of my objections were, on the surface, more modern than biblical." -Gregory Alan Thornbury, Carl F. Henry Center for Christian Leadership " T]his book cries out against the bland, purely spiritualized Christianity to which so many of us have become accustomed. . . . I highly recommend it." -David Kind, Pilgrimage, Concordia Theological Seminary

▼▲
I'm the author/artist and I want to review Angels in the Architecture: A Protestant Vision for Middle Earth.
Back