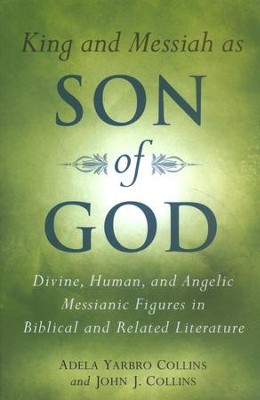 King and Messiah as Son of God: Divine, Human, and Angelic Messianic Figures in Biblical and Related Literature

▼▲
* Where did the titles "King," "Messiah," and "Son of God" come from? Arguing that Jesus was called "the Son of God" because his followers believed him to be the messianic king, the authors contend that Jesus' names were cuturally rooted and informed by ancient Near Eastern royal ideology. Their controversial thesis is sure to spark fresh debate. 264 pages, softcover from Eerdmans.

▼▲
This book traces the history of the idea that the king and later the messiah is Son of God, from its origins in ancient Near Eastern royal ideology to its Christian appropriation in the New Testament.

Both highly regarded scholars, Adela Yarbro Collins and John J. Collins argue that Jesus was called "the Son of God" precisely because he was believed to be the messianic king. This belief and tradition, they contend, led to the identification of Jesus as preexistent, personified Wisdom, or a heavenly being in the New Testament canon. However, the titles Jesus is given are historical titles tracing back to Egyptian New Kingdom ideology. Therefore the title "Son of God" is likely solely messianic and not literal. King and Messiah as Son of God is distinctive in its range, spanning both Testaments and informed by ancient Near Eastern literature and Jewish noncanonical literature.

Peter Machinist
— Harvard University
"Adela and John Collins add yet another book to their long list of significant contributions to biblical studies. King and Messiah as Son of God stands out as a comprehensive, systematic, and authoritative study of the much discussed and controversial issue of their title. They succeed admirably in demonstrating that kingship, messiahship, and divinity form a complex relationship whose understanding underwent an organic development, yet with a range of variations, from early monarchic Israel and its ancient Near Eastern roots through the Christianity of the New Testament era. In laying out this picture, the Collinses offer an exemplary set of close readings of the ancient sources and the welter of modern scholarship on them. Everywhere evident is their capacity for incisive, balanced judgments regarding difficult texts and problems and their ear for subtle nuances that might easily have escaped other interpreters."

Journal of the Evangelical Theological Society
"The authors have produced a fine volume that touches on an underappreciated area in biblical studies, namely, the relationship between kingship/messiahship and divinity. . . It is a worthwhile volume to read for anyone with an interest in ancient kingship or NT Christology."

▼▲
I'm the author/artist and I want to review King and Messiah as Son of God: Divine, Human, and Angelic Messianic Figures in Biblical and Related Literature.
Back
Back