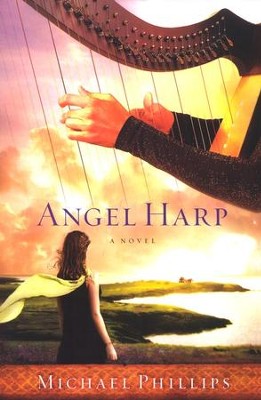 ▼▲
To amateur harpist Marie Buchan, her Scotland vacation is a dream come true. But when she's drawn into a love triangle between the village curate and the local duke, she finds herself at the center of a controversy over a mysterious death and must decide . . . who's telling the truth? And whose side will she take? 464 pages, softcover from Faithwords.

▼▲
Widowed at 34, amateur harpist Marie "Angel" Buchan realizes at 40 that her life and dreams are slowly slipping away. A summer in Scotland turns out to offer far more than she ever imagined! Not only does the music of her harp capture the fancy of the small coastal village she visits, she is unexpectedly drawn into a love triangle involving the local curate and the local duke.

The boyhood friends have been estranged as adults because of their mutual love of another woman (now dead) some years before. History seems destined to repeat itself, with Marie in the thick of it. Her involvement in the lives of the two men, as well as in the community, leads to a range of exciting relationships and lands Marie in the center of the mystery of a long-unsolved local murder. Eventually she must make her decision: with whom will she cast the lot of her future?

▼▲
Michael Phillips has been writing in the Christian marketplace for thirty years. All told, he has written, co-written, and edited some 110 books. Phillips and his wife live in the U.S., and make their second home in Scotland.

▼▲
The struggle to find God is a journey well-illustrated in Michael Phillips' romance novel, Angel Harp. Loneliness drives the main character, Marie Buchan, to travel to Scotland six years after her husband's death, and she finds solace in playing her harp on the hills. Her music reaches people in an unexpected way, and she becomes involved in a love triangle that becomes very complicated as the mysterious pasts of the townspeople are revealed. Both spiritual and relational growth take place in the town of Port Scarnose, Scotland, as strings are literally plucked and secrets are revealed, confronted, and forced into amending.

Marie first becomes attached to a mysterious girl named Gwendolyn, a musical prodigy, and to Iain Barclay, the local curate. Iain's unconventional doctrine challenges Marie to rethink her opinions about God. Though feelings begin to evolve between Marie and Iain, the introduction of the duke, Alasdair, creates a new dynamic of loyalty and friendship that forces Marie to re-evaluate where she should put her trust. Marie faces doubt and confusion as she learns more about Iain and Alasdair's past mutual love interest: a woman who died years ago.

Marie always saw herself as shy and quiet, but the people of Port Scarnose bring out a spirit of enthusiasm in her. She learns to love the seemingly simple personalities of the Scots, but is even more drawn to them once their secrets unfold. Her faith is also questioned as she realizes that even though she is not a church person, she may still have a longing within her to know God.

Angel Harp was an easy plot to follow and, for the most part, kept me engaged. I enjoyed the spiritual core of this book, but thought the first couple of chapters were fairly clichéd. However, I would recommend this book to women who like romance novels.  Tara Gnagy, www.ChristianBookPreviews.com

▼▲
Phillips, with more than 50 novels with combined sales of four million, taps into his love for Scotland--where he lives part of the year--for his newest tale. Canadian harpist Marie Buchan, widowed at the age of 34, revives her dream of visiting Scotland. She discovers Port Scarnose on the coast, where she decides to stay for several weeks. Marie's music captures the attention first of young Gwendolyn, then red-haired curate Iain Barclay, and finally Alasdair Reidhaven, duke of Buchan. Mysterious ties bind these three, and then Marie, as she comes to love the people and history of Port Scarnose and Scotland itself. She vows to uncover the mystery that surrounds the town, but fears she may hurt the people she is becoming attached to. Several out-of-tune notes mar Phillips's tale: long coloratura from Marie on matters spiritual and personal; a leitmotif of hard-to-understand Scottish dialect; and adagio pacing throughout. While Marie's musical, spiritual, romantic, and emotional rebirth will draw readers, the tale is long and winding. (Jan.) Copyright 2010 Reed Business Information.

▼▲
I'm the author/artist and I want to review Angel Harp.
Back
Back