The Andrew Paradigm: How to be a Lead Follower of Jesus
By: Michael J. Coyner 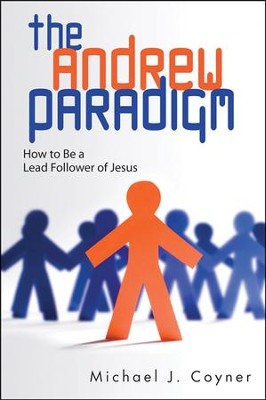 The Andrew Paradigm: How to be a Lead Follower of Jesus

▼▲
* Jesus said, "Come, follow me." But how can you be a church leader and a follower? Showing that Christian leadership is more than implementing the latest fads, Coyne examines the life of Jesus' disciple Andrew to help you distinguish between leadership and "followership," make Christ the ethical center of your life, and more. 128 pages, softcover from Abingdon.

The current trend in church leadership involves looking for a highly gifted leader who will take over, direct the future, cast a vision, and attract the faithful to a new mission or purpose. This desire for a leader to come to the rescue is eerily reminiscenet of the desire of the Israelites for a king, so they could "be like every other nation." In spite of Samuel's warnings, the people insisted, so God reluctantly gave them King Saul. That didn't go so well.

While we always need good, new, and talented leaders, we also need leaders who know how and when to be good followers. Particularly in a culture of distrust, leadership must be granted, earned, and supported by those who are willing to follow. Leading begins with the counter-intuitive command: "Come, follow me."

This imperative is far from easy. Many turned away from Jesus, unable to follow. However, one excellent model of "followership" stood out from the rest - the little-known disciple Andrew. In fact, Andrew is the model and paradigm for being a Lead Follower.

Bishop Michael J Coyner is the Bishop of the Indiana Conference of the The United Methodist Church.

Bishop Mike as most people call him, is originally from Anderson, Indiana. He served churches of various sizes, served as a District Superintendent of the former Lafayette District, and was also the Executive Assistant to Bishop Woodie W. White for the Indiana Area. He was elected a bishop of the United Methodist Church in 1996 and was assigned to the Dakotas Area where he served two terms as resident bishop. In 2004 he was assigned to serve the Indiana Area, and in 2008 he was assigned to a second term.

Bishop Mike and his wife, Marsha, live in the Indianapolis area. He oversees the life and ministry of over 1,200 United Methodist congregations in Indiana, including over 200,000 members organized into 10 districts. Under Bishop Coyners leadership, the former North and South Indiana Conference voted in 2008 to create a new Indiana Conference which was launched in 2010.

Bishop Mike and Marsha have two adult children and four grandchildren. Laura and her husband, Adrian Peace, are both engineers with GE in Louisville, and the parents of Brianna and Austin. Steve, a pharmaceutical salesman, and his wife, Jessica, live in Fishers, and are the parents of Ashlee and Leah.

Bishop Mike received his B.A. degree from Purdue, his M. Div. Degree from Duke Divinity School, and his Doctor of Ministry degree from Drew Theological School. Bishop Mike also has received honorary doctorates from Dakota Wesleyan University, the University of Evansville and the University of Indianapolis. He is the author of several articles and four books: Making a Good Move (Abingdon Press, 1999), Prairie Wisdom (Abingdon Press, 2000), The Race to Reach Out (Abingdon Press, 2004) and A Year With John Wesley and Our Methodist Values (Discipleship Resources, 2008). In addition to serving as a Trustee or Board member of various United Methodist agencies and institutions here in Indiana, Bishop Coyner also serves on the General Council on Finance and Administration for the denomination.

▼▲
I'm the author/artist and I want to review The Andrew Paradigm: How to be a Lead Follower of Jesus.
Back
×