Skip to main content
SPRING CYBER EVENT STARTS NOW: And it's a really BIG deal! Up to 88% off through 5/24>
Andersen's Fairy Tales
By: Hans Christian Andersen
Stock No: WW532072 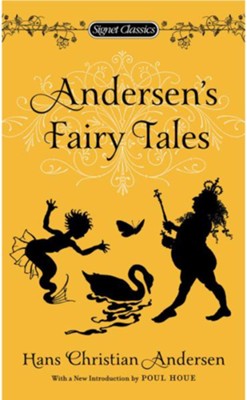 ▼▲
For more than 150 years, Hans Christian Andersen’s beloved fairy tales have charmed and entertained audiences around the world. Blending old folk tales with fantasy, the Danish bard’s stories are rich in humor and sharp with irony. The forty-seven fables in this beautifully translated collection tell of kings and princesses, of farm boys and mermaids, of witches and ogres. Some of the tales—like The Little Match Girl and The Emperor’s New Clothes—we know by heart. Others—like The Jumpers and The Flying Trunk—are sure to become instant favorites. Packed with memorable characters (who could forget the Ugly Duckling or the Little Mermaid?), Andersen’s fairy tales have withstood the test of time, delighting generation after generation of children and adults—and they promise to remain bedtime favorites for centuries to come&hellip;

With a New Introduction

And an Afterword by Joanne Greenberg

▼▲
Hans Christian Andersen was born in 1805 in Odense, Denmark. His father was a poor cobbler,  his mother nearly illiterate. At fourteen, armed with little more than sheer determination, Andersen went to Copenhagen, where he succeeded in winning the patronage of several prominent citizens, and acquired some formal schooling. In 1829, his poems, plays, and travel sketches began to appear. In 1835, his first novel, The Improvisatore, met with considerable success. That same year, he published his first collection of tales, to be followed over the years by further creations in a genre he made singularly his own.  His life was marked by extensive travels, enormous popularity, the friendship of many leading personalities of the era, and the highest honors of his native land. By the time of his death in 1875, this gauche, awkward figure, born in the humblest of circumstances, had enjoyed a career that might well have come out of one of his most imaginative tales.

Joanne Greenberg was born in Brooklyn, New York, in 1932. She graduated from American University and presently teaches at the Colorado School of Mines. The author of many award-winning novels, including I Never Promised You a Rose Garden and In This Sign, she lives in Denver, Colorado.

▼▲
I'm the author/artist and I want to review Andersen's Fairy Tales.
Back