Andalusian Hours: Poems from the Porch of Flannery O'Connor
By: Angela O'Donnell 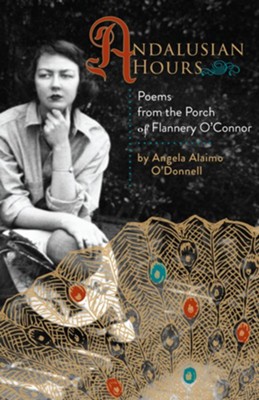 Andalusian Hours: Poems from the Porch of Flannery O'Connor

▼▲
Andalusian Hours: Poems from the Porch of Flannery O’Connor is a collection of 101 sonnets that channel the voice of celebrated fiction writer, Flannery O’Connor. In these poems, poet and scholar Angela Alaimo O’Donnell imagines the rich interior life Flannery lived during the last fourteen years of her life in rural Georgia on her family’s farm named "Andalusia." Each poem begins with an epigraph taken from O’Connor’s essays, stories, or letters; the poet then plumbs Flannery’s thoughts and the poignant circumstances behind them, welcoming the reader into O’Connor’s private world. Together the poems tell the story of a brilliant young woman who enjoyed a bright and promising childhood, was struck with lupus just as her writing career hit its stride, and was forced to return home and live out her days in exile, far from the literary world she loved. By turns tragic and comic, the poems in Andalusian Hours explore Flannery’s loves and losses, her complex relationship with her mother, her battle with her illness and disability, and her passion for her writing. The poems mark time in keeping with the liturgical hours O’Connor herself honored in her prayer life and in her quasi-monastic devotion to her vocation and to the home she learned to love, Andalusia.

▼▲
Angela Alaimo O’Donnell, Ph.D., is a writer, poet, and professor. She teaches English, Creative Writing, and courses in Catholic Studies at Fordham University in New York City and serves as Associate Director of Fordham’s Curran Center for American Catholic Studies. She is also co-editor of the Curran Center’s new book series, "Studies in the Catholic Imagination: The Flannery O’Connor Trust Series," published by Fordham University Press. In addition, she has recently received the good news that the Flannery O’Connor Trust is bestowing a grant for $450,000 to the Curran Center in response to her application to endow international conferences devoted to promoting O’Connor’s work.

▼▲
"Avid readers of Flannery O’Connor will find Andalusian Hours a stunning, thrilling, glorious collection of poems inspired by Flannery’s own biography and her smart, witty, yearning reflections on things large and small. Angela Alaimo O’Donnell has accomplished an amazing thing here, channeling Flannery’s voice and by a kind of alchemy reproducing the gold of a mostly hidden life that is both deeply revealing and utterly convincing. This is, for me, O’Donnell’s finest book so far." —Ron Hansen, author of Mariette In Ecstasy

"Get ready to delight in, yes, a full cento of gorgeous, endlessly fascinating and endlessly varied sonnets in a no-nonsense Georgia-bound idiom, this two-year labor of real love, where one of our best contemporary Catholic poets has managed—thank God—to channel the wit, humor, and profound spirituality of our own saint Flannery O’Connor, broken and flawed like the rest of us, whether we know it or not, and yet risen now once again in these poems and crying out, startling us into a brilliant new reality, like one of those blue peacocks of hers unfolding a hundred eyes before us." —Paul Mariani, author of The Mystery of It All: The Vocation of Poetry in the Twilight of Modernity

"Angela Alaimo O’Donnell’s singular biography, Flannery O’Connor: Fiction Fired by Faith, seemed to offer the last word on a compelling author. But now the polyvalent O’Donnell has switched genres, and in 101 sonnets she channels O’Connor’s voice, writing poems like "Flannery and TV," "Flannery Considers Marriage," and "Flannery in the Bullring." In exploring between-the-line nuances of O’Connor’s letters and essays, O’Donnell reaches beyond O’Connor’s words to imagine—richly and provocatively—what might have occasioned them. This is a collection of poems without precedent. It will surprise the reader with every line of startling insight—so similar to O’Connor that it will give you goosebumps." —Jill Pelaez-Baumgaertner, author of Flannery O’Connor: A Proper Scaring

"This book wowed me from the first introductory poem—Flannery’s musings on the porch, her tendernesses towards her father, her loving endurance of her mother, and the panache of the final rhymed couplets. Angela Alaimo O’Donnell has done Flannery O'Connor the great service of removing her from the static position as icon and allowing her to move and breathe and have full being. Flannery O'Connor would much admire the technical mastery and the depth of vision of these poems." —Mary Gordon, author of On Thomas Merton

"In a word, stunning. O’Donnell has long been recognized as a fine poet. With this ambitious sequence of 101 sonnets she ensures her abiding place as one of America’s most brilliant literary voices—plural. Stepping beyond mere ’channeling,’ O’Donnell exhibits her gift for Keatsian empathy, that rare poetic sensibility, and ’negative capability’ through which she becomes O’Connor in word, wit, and point of view. Another invaluable gift to be found here is the one she bestows unabashedly, and with a distinctive Southern drawl, on the attentive reader and the world." —Margaret B. Ingraham, Academy of American Poets Award-winner, author of Exploring this Terrain: Poems

▼▲
I'm the author/artist and I want to review Andalusian Hours: Poems from the Porch of Flannery O'Connor.
Back
×