See and Say: A Picture Book in Four Languages
By: Antonio Frasconi 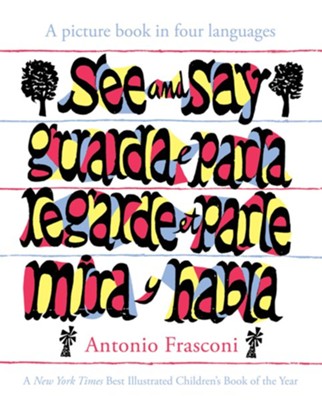 See and Say: A Picture Book in Four Languages

▼▲
Winner of two School Library Journal 2018 Awards: Best Bilingual Book for Kids & Best Picture Book Reprint
"In 1953, Time magazine called Antonio Frasconi America's foremost practitioner of the ancient art of the woodcut. Four decades later, Art Journal called him the best of his generation." â· The New York Times
In this New York Times Best Book of the Year, internationally renowned artist Antonio Frasconi presents beautiful and brightly colored woodcuts depicting a variety of everyday items — a boat, Christmas tree, dog, train, birthday cake, and many other eye-catching objects. The word for each image is given in English (printed in black), Italian (blue), French (red), and Spanish (green), and accompanied by pronunciation guides. A page of common expressions such as "Good morning!" and "What time is it?" in each language appears at the end.
For the very young, this is a delightful picture book; for older children, it offers useful illustrated language lessons. All will enjoy the whimsical images and accompanying words and phrases.

▼▲
Antonio Frasconi (1919–2013) was an artist of international fame whose work is represented in leading art museums around the world, including the Metropolitan Museum of Art, the Museum of Modern Art, the New York Public Library, and the Smithsonian Institution's National Gallery of Art. The Uruguayan-American artist was raised in a bilingual setting, which fostered his belief that children should be made aware of other languages early in life and led to his use of multiple languages in his award-winning picture books.

▼▲
I'm the author/artist and I want to review See and Say: A Picture Book in Four Languages.
Back
×