We are OPEN and SHIPPING - click here for shipping estimates
Eva and Sadie and the Worst Haircut EVER!
By: Jeff Cohen
Illustrated By: Elanna Allen 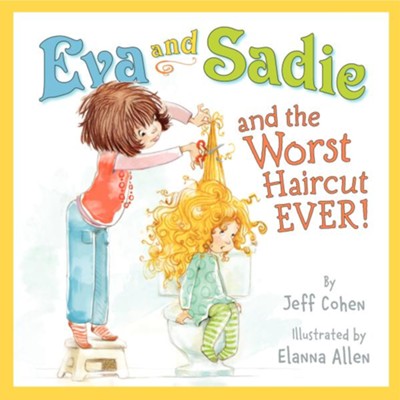 Eva and Sadie and the Worst Haircut EVER!

Meet Eva and Sadie in debut picture book author Jeff Cohen's Eva and Sadie and the Worst Haircut EVER! The book was inspired by the viral recording of NPR reporter Jeff interviewing his two little girls explaining the worst haircut ever. When big sister Sadie notices Eva's hair is just too long and getting out of control, she decides to take matters into her own hands. When the haircut is over and there's a pile of hair on the floor, Sadie realizes she may have done something wrong. What will Eva and Sadie's parents say? Will they be able to fix the worst haircut ever? With beautiful illustrations from Elanna Allen, young readers will love reading a story based on a real-life sister act! In the same vein as Fancy Nancy, the fun and creativity of sibling relationships shine through in this sweet tale of cutting hair and learning lessons.

Jeff Cohen has been a reporter since 2001, first in newspapers and now at public radio station WNPR in Hartford. A proud New Orleans native, he lives in Connecticut with his wife, two daughters, and their cats.

Elanna Allen graduated from Brown University and studied animation and illustration at the Rhode Island School of Design. She has designed characters and directed animation for Playhouse Disney, Nick Jr., and PBS. She lives in New York City with her husband and two boys, and is currently trying to learn to play the ukulele.

▼▲
I'm the author/artist and I want to review Eva and Sadie and the Worst Haircut EVER!.
Back
×