Skip to main content
CUSTOMER APPRECIATION SALE: Thousands of starry deals through 6/22!
1 and 2 Peter: Courage in Times of Trouble - eBook
By: John MacArthur
Stock No: WW82338EB 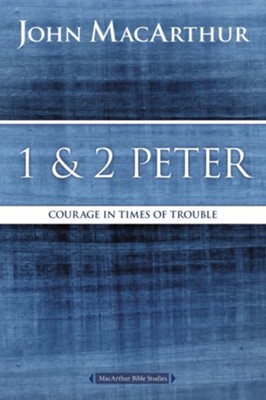 1 and 2 Peter: Courage in Times of Trouble - eBook

By: John MacArthur
More in MacArthur Bible Studies Series
Thomas Nelson / 2016 / ePub
5 out of 5 stars for 1 and 2 Peter: Courage in Times of Trouble - eBook (3 Reviews) Write a Review
In Stock
Stock No: WW82338EB

John MacArthur takes readers through the books of 1 & 2 Peter, exploring the writer’s teachings on the blessings available to believers because of persecution and how we must discern and defeat the false teachers in our midst. This study can be used for personal reflection or for use in a small-group setting.

Believers in the early church scattered across the Roman Empire were facing the threat of increased persecution. Peter, the most outspoken of the disciples and leader among the apostles, wrote two practical and encouraging letters to strengthen the hearts of these followers of Christ. Through words of hope and wisdom, he taught them how to live victoriously in the midst of life-threatening trials.

In the first letter, Peter reminds believers of the many blessings available to them because of their persecution. In the second letter, he warns them to discern and defeat the false teachers who were invading their churches and teaching them dangerous and deceptive doctrines. Peter’s letters of encouragement and warning are just as important for believers today to hear and understand as they were during the first century.

The MacArthur Bible Studies provide intriguing examinations of the whole of Scripture. Each guide incorporates extensive commentary, detailed observations on overriding themes, and probing questions to help you study the Word of God with guidance from John MacArthur.

John MacArthur has served as pastor-teacher of Grace Community Church in Sun Valley, California, since 1969. His ministry of expository preaching is unparalleled in its breadth and influence. In more than five decades of ministry from the same pulpit, he has preached verse by verse through the entire New Testament and several key sections of the Old Testament. He is Chancellor of the Master’s University and Seminary, and can be heard daily on the Grace to You radio broadcast (carried on hundreds of radio stations worldwide). He has authored numerous bestselling books, including Twelve Ordinary Men and One Perfect Life.

For more details about John MacArthur and his Bible-teaching resources, contact Grace to You at 800-55-GRACE or gty.org.

▼▲
I'm the author/artist and I want to review 1 and 2 Peter: Courage in Times of Trouble - eBook.
Back
Back