Skip to main content
SPRING CYBER EVENT STARTS NOW: And it's a really BIG deal! Up to 88% off through 5/24>
Mr. and Mrs. Dove: Short Story - eBook
By: Katherine Mansfield
Stock No: WW70443EB 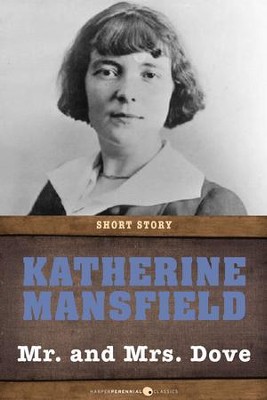 Before Reggie returns to his fruit farm in Rhodesia, he must propose to the woman he loves. At Colonel Proctor’s, Anne greets him at the door and, during a lull in their conversation, suggests Reggie say goodbye to her doves, as well. Mrs. Dove, tittering, always walks in front, Anne points out, and Mr. Dove always follows, bowing. She could never live like that, she says, when Reggie asks her to marry him. Or could she?

Katherine Mansfield was a popular New Zealand short-story writer best known for the stories "The Woman at the Shore," "How Pearl Button Was Kidnapped," "The Doll’s House," and her twelve-part short story "Prelude," which was inspired by her happy childhood. Although Mansfield initially had her sights set on becoming a professional cellist, her role as editor of the Queen’s College newspaper prompted a change to writing. Mansfield’s style of writing revolutionized the form of the short story at the time, in that it depicted ordinary life and left the endings open to interpretation, while also raising uncomfortable questions about society and identity. Mansfield died in 1923 after struggling for many years with tuberculosis.

▼▲
I'm the author/artist and I want to review Mr. and Mrs. Dove: Short Story - eBook.
Back
Back