Skip to main content
Men and Masculinities in Christianity and Judaism: A Critical Reader
By: Bjorn Krondorfer
Stock No: WW041917 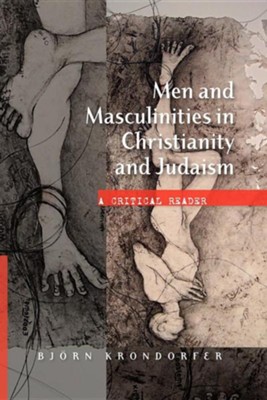 Men and Masculinities in Christianity and Judaism: A Critical Reader

▼▲
Bjorn Krondorfer, one of the leading scholars in this field, has collected 35 key texts that have shaped this field within the wider area of the study of gender, religion and culture. The texts in this critical reader engage actively and critically with the position of men in society and church, men's privileged relation to the sacred and to religious authority, the ideals of masculinity as engendered by religious discourse, and alternative trajectories of being in the world, whether spiritually, relationally or sexually. Each of the texts is introduced by the editor and accompanied by bibliographies that make this the ideal tool for study.

▼▲
Björn Krondorfer is Director of the Martin-Springer Institute at Northern Arizona University and Endowed Professor of Religious Studies in the Department of Comparative Cultural Studies. His field of expertise is religion, gender, culture, (post-) Holocaust studies, Western religious thought, and reconciliation studies. His scholarship helped to define the field of Critical Men's Studies in Religions. Nationally and internationally, Krondorfer facilitates intercultural encounters on issues of conflict, memory, and reconciliation. He has been invited to speak, present his research, and facilitate workshops and seminars in South Africa, Australia, South Korea, Finland, Poland, United Kingdom, Italy, Israel/Palestine, Germany, Switzerland, Austria, and Canada.

▼▲
'Men and Masculinities in Christianity and Judaism: A Critical Reader is an indispensable introduction to the study of critical men's studies in religion. Between the selected texts and Krondorfer's editorial introductions, the book is a course in itself. Hopefully, it will also kick-start other taught courses in this subject which are woefully underrepresented at the present time, as well as offering some extra depth to the large number of gender and religion courses out there which have a habit of glossing over masculinities. Furthermore, Krondorfer's framing of critical men's studies in religion should help put to rest feminist, pro-feminist and queer concerns that it conceals a masculinist agenda' Dr Joseph Gelfer Editor, Journal of Men, Masculinities and Spirituality
From cover to cover the volume facilitates better understanding of the place of men and masculinities in Christianity and Judaism; it will surely be a staple in the future of critical men's studies in religion.

▼▲
I'm the author/artist and I want to review Men and Masculinities in Christianity and Judaism: A Critical Reader.
Back