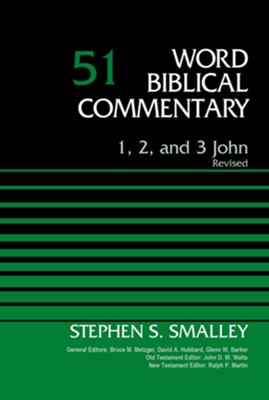 ▼▲
"A major work. Smalley is at his best when he is summarizing and interacting with positions of others. His bibliography is sound,"---New Testament Commentary Survey. Fathoms the depths of such phrases as God is love; the world, the flesh, and the devil; do not believe every spirit; he who has the Son has life. 416 pages, hardcover.

Stephen S. Smalley (Ph.D., Cambridge) has retired from his position as Dean of Chester in England. His previous works include John: Evangelist and Interpreter, The Revelation to John, and numerous scholarly articles on the Johannine corpus.