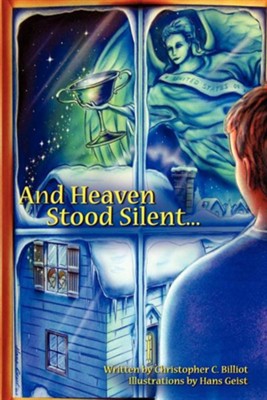 ▼▲
It was a bitter cold December night. The wind howled through the trees as the Artic air blew with the fierceness of a hurricane. Storm clouds gathered on the horizon as the forces of good and evil were about to collide. I could hear the howling of a lone wolf and the hooting of a wise owl as they warned both man and beast alike about the creatures that were on the move this bitter cold evening.While mortal men slept, totally oblivious to the warnings and movements of the creatures not of the realm of man, one person was called upon to witness and to intercede in the drama about to unfold; a drama unknown to mortal man, but one forever logged in the annuals of the highest courts of the heavenly realms....The inevitable was about to take place....All of Heaven Stood Silent...The fate of mankind was about to be sealed as the left side of the scale started to reach its lowest extreme.In who's favor would the scales of justice tip?Discover who really holds the key to the fate of mankind in this powerful, touching tale written by Native American Christopher Billiot.Read the amazing story that "came" in the early morning hours to this boat captain as he was navigating the inland waterways, in the summer months prior to 9/11. There are no accidents A Native American born and raised in the small South Louisiana fishing town of Dulac. He grew up hunting and fishing in the swamps and bayous of the area. Chris is a member of Grand Caillou Baptist Church. A captain on inshore and offshore vessels servicing the oil fields in the Gulf of Mexico and the inland water ways of the Gulf Coast.

▼▲
I'm the author/artist and I want to review And Heaven Stood Silent....
Back
×