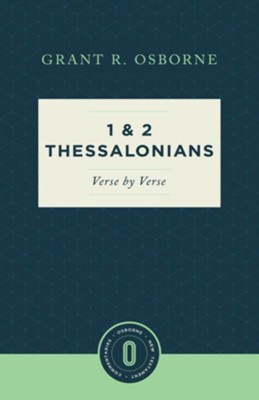 1 and 2 Thessalonians Verse by Verse - eBook

Paul's letters to the church in Thessalonica are often considered two of the less important of his letters, but they were written to a very important city with very important issues. In addition to addressing the issue of Christ's return and the problem of people who refused to work, these letters model a truly loving relationship between a pastor and a congregation.

In 1 & 2 Thessalonians Verse by Verse, respected New Testament scholar Grant R. Osborne shows us that in a world that centered on the divinity of the emperor and the demands to participate in the worship of the gods, the Thessalonians desperately needed to be given resources that would help them withstand the pressure to conform. These letters provide us with a thrilling example of affection among believers in extremely hard times and help us see how that affection can make severe trials bearable.

The Osborne New Testament Commentaries, by respected professor and author Grant R. Osborne, are for people seeking a straightforward explanation of the text in its context, avoiding either oversimplification or technical complexity. Osborne brings out the riches of the New Testament, making each book accessible for pastors and all who consider themselves students of Scripture.

▼▲
I'm the author/artist and I want to review 1 and 2 Thessalonians Verse by Verse - eBook.
Back
Back