Skip to main content
Ancient Wine and the Bible: The Case for Abstinence
By: David Brumbelow, Paige Patterson
Stock No: WW656129 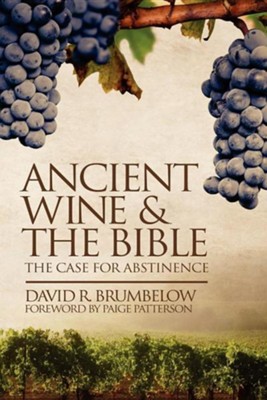 Ancient Wine and the Bible: The Case for Abstinence

▼▲
Having spent years in the pastorate, David Brumbelow has observed the tragedies associated with consumption of intoxicating beverages. Brumbelow determined to research the matter and reassess the teachings of Scripture about alcohol. The volume you hold, Ancient Wine and the Bible: The Case for Abstinence, addresses the subject with keen logic, a grasp of history, and thorough exegesis of biblical literature. Acknowledging that the Scriptures do not retain an expressed mandate against drinking alcoholic beverages as "thou shalt not steal,"he, nevertheless, demonstrates that the overwhelming witness of the Bible is like a mighty breaking wave on the north shore of Oahu, demanding abstinence based on case histories of the devastation of "strong drink" added to the "wisdom" literature of the Bible in its repeated call for abstinence.

Tell us a little about yourself.  Graduate of ETBU and SWBTS.

Served as pastor for over 20 years.

Enjoy history, gardening, the outdoors, and this ended up relating to much of the research behind Ancient Wine and the Bible.

What was your motivation behind this project?  Grew up with a biblical conviction against the recreational use of mind-altering drugs, including alcohol. Yet in my lifetime Ive seen these convictions seriously eroded in institutions and many individuals. I listened to and read many of the Christian arguments in favor of drinking and honestly sought to research and answer them. Included also is the desire to equip the preacher, youth minister, Sunday School teacher, parents, and others who need the answers and documentation to reply to those who promote drinking and drugs. Additionally a desire to warn those, whether already drinking or not, of the serious dangers involved in alcohol.

What do you hope folks will gain from this project?  Discover the truth about the Bible and ancient wine and alcohol. Numerous Scriptures on wine, especially the controversial ones, are dealt with in detail (Deuteronomy 14:26; Judges 9:13; Psalm 104:15; Isaiah 25:6; 65:8; John 2; Acts 2:13; 1 Timothy 5:23; and many others.). Learn the scientific and historical fact that ancients did indeed know how to prevent grape juice from fermenting into alcohol. They practiced a number of ways that provided unfermented wine throughout the year. Realize the word wine is used in the Bible and ancient literature to refer to both fermented and unfermented wine. See that the Bible speaks both directly and indirectly (biblical principles) against the use of alcohol and other dangerous drugs. Gain the resources to warn others, especially the younger generations, of the dangers of alcohol.

How were you personally impacted by working on this project?  After over three years of research and countless hours, I am more convinced than ever of the biblical teaching concerning alcohol and other drugs. Ive enjoyed the study of ancient literature and been impressed with the ancients knowledge of preserving food and drink, knowledge few possess today. Im convinced that more believers need to speak out on this issue and provide literature that clearly deals with the subject.

Anything else you'd like readers / listeners to know:  A couple of endorsements: I know of no definitive work offered today that does what Brumbelow does in his book. It is scholarly, sound and makes for an irrefutable argument in favor of abstaining from alcoholic beverages. I believe every pastor ought to have a copy. -Mark Creech, president, American Council on Alcohol Problems (ACAP). "With the clarity, logic, and thoroughness, an outstanding attorney uses to prepare a brief in a major lawsuit, David Brumbelow approaches the question of drinking alcoholic beverages from a Biblical point of view. This work is outstanding. I recommend it strongly. The upcoming generations need to know the havoc brought on our society and upon individuals by the use of alcohol. If we use it ourselves, we recommend its use to others. A Christian should not exercise his freedom to put himself and others at such a risk. -Judge Paul Pressler, Houston, TX.