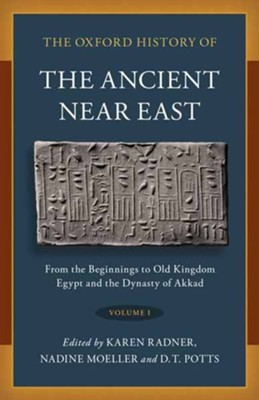 Oxford History of the Ancient Near East: Volume I: From the Beginnings to Old Kingdom Egypt and the Dynasty of Akkad

Edited By: Karen Radner, Nadine Moeller, D.T. Potts
By: Edited by Karen Radner, Nadine Moeller & D.T. Potts
More in Oxford History of the Ancient Near East Series
Oxford University Press / 2020 / Hardcover
Write a Review
Buy 10 or more for $127.29 each.
In Stock
This product ships free to addresses in the US!
(Just select Standard shipping at checkout.)
Stock No: WW687854
Buy Item Our Price$133.99 Retail: Save 11% ($16.01)
In Stock
Quantity:
Ships free to the US
Stock No: WW687854
Oxford University Press / 2020 / Hardcover
Quantity:
Add To Cart
of These in Your Cart

▼▲
A critical survey of the foundational populations for all future developments in the ancient Near East. The authors provide a masterful look at the early dynasties and territorial states in Western Asia and Northeast Africa. Integrating the latest epigraphic research and archaeological discoveries, they explore the politics, religion, economy, art, and military developments of these communities. 804 pages, hardcover.

▼▲
This groundbreaking, five-volume series offers a comprehensive, fully illustrated history of Egypt and Western Asia (the Levant, Anatolia, Mesopotamia, and Iran), from the emergence of complex states to the conquest of Alexander the Great. Written by a highly diverse, international team of
leading scholars, whose expertise brings to life the people, places, and times of the remote past, the volumes in this series focus firmly on the political and social histories of the states and communities of the ancient Near East. Individual chapters present the key textual and material sources
underpinning the historical reconstruction, paying particular attention to the most recent archaeological finds and their impact on our historical understanding of the periods surveyed.

Commencing with the domestication of plants and animals, and the foundation of the first permanent settlements in the region, Volume I contains ten chapters that provide a masterful survey of the earliest dynasties and territorial states in the ancient Near East, concluding with the rise of the Old
Kingdom in Egypt and the Dynasty of Akkad in Mesopotamia. Politics, ideology, religion, art, crafts, economy, military developments, and the built environment are all examined. Uniquely, emphasis is placed upon elucidating both the internal dynamics of these states and communities, as well as their
external relationships with their neighbors in the wider region. The result is a thoughtful, critical, and robust survey of the populations that laid the foundation for all future developments in the ancient Near East.

▼▲
Karen Radner is Alexander von Humboldt Professor of Ancient History of the Near and Middle East at Ludwig-Maximilians-Universität München.

Nadine Moeller is Professor of Egyptian Archaeology at Yale University.

D. T. Potts is Professor of Ancient Near Eastern Archaeology and History at the Institute for the Study of the Ancient World, New York University.

▼▲
I'm the author/artist and I want to review Oxford History of the Ancient Near East: Volume I: From the Beginnings to Old Kingdom Egypt and the Dynasty of Akkad.
Back