Skip to main content
OUR BIGGEST BARGAIN SALE EVER: Over 6,000 deals at never-seen-before prices ~ through 8/23. Shop now >
Ancient Syria: A Three Thousand Year History
By: Trevor Bryce
Stock No: WW828907 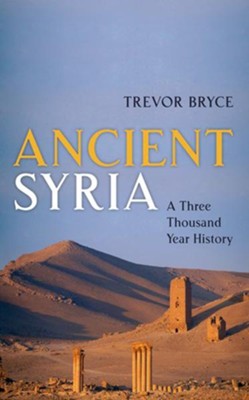 Syria has long been one of the most trouble-prone and politically volatile regions of the Near and Middle Eastern world. Ancient Syria looks back beyond the troubles of the present to tell the 3000-year story of what happened many centuries before. Trevor Bryce reveals the peoples, cities, and kingdoms that arose, flourished, declined, and disappeared in the lands that now constitute Syria, from the time of its earliest written records in the third millennium BC until the reign of the Roman emperor Diocletian at the turn of the 3-4th century AD.

Across the centuries, from the Bronze Age to the Rome Era, we encounter a vast array of characters and civilizations, enlivening, enriching, and besmirching the annals of Syrian history: Hittite and Assyrian Great Kings; Egyptian pharaohs; Amorite robber-barons; the biblically notorious Nebuchadnezzar; Persia's Cyrus the Great and Macedon's Alexander the Great; the rulers of the Seleucid empire; and an assortment of Rome's most distinguished and most infamous emperors. All swept across the plains of Syria at some point in her long history. All contributed, in one way or another, to Syria's special, distinctive character, as they imposed themselves upon it, fought one another within it, or pillaged their way through it.

But this is not just a history of invasion and oppression. Syria had great rulers of her own, native-born Syrian luminaries, sometimes appearing as local champions who sought to liberate their lands from foreign despots, sometimes as cunning, self-seeking manipulators of squabbles between their overlords. They culminate with Zenobia, Queen of Palmyra, whose life provides a fitting grand finale to the first three millennia of Syria's recorded history. The conclusion looks forward to the Muslim conquest in the 7th century AD: in many ways the opening chapter in the equally complex and often troubled history of modern Syria.

Trevor Bryce is an Honorary Research Consultant in the University of Queensland, and an Emeritus Professor of the University of New England, Australia, where he was Professor of Classics and Ancient History. He is also a Fellow of the Australian Academy of the Humanities and has been awarded an Australian Centenary medal for services to History. Although trained as a Classicist, primarily in Latin language and literature, most of his research has been conducted in the field of Near Eastern history and civilization, with some emphasis also on the links between the Classical and Near Eastern worlds. He is the author of numerous books and articles on Near Eastern history, including The World of the Neo-Hittite Kingdoms (2012) and Babylonia: A Very Short Introduction (2016), also published by Oxford University Press.

▼▲
"A must read for anyone interested in this wonderful country." -- Timeless Travels
"[An] absorbing book ... This is essential bed-time reading for anyone wanting to know more about the history of one of the ancient world's most significant civilizations." -- Ancient Egypt Magazine

▼▲
I'm the author/artist and I want to review Ancient Syria: A Three Thousand Year History.
Back