Skip to main content
SPRING CYBER EVENT STARTS NOW: And it's a really BIG deal! Up to 88% off through 5/24>
Ancient Prophets and Modern Problems - eBook
Edited By: Bob Hostetler
By: Samuel L. Brengle
Stock No: WW82748EB 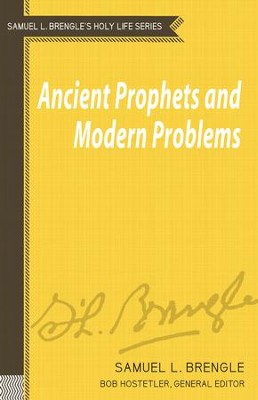 ▼▲
This Brengle classic compiles writings from his later years. Edited for modern readership by popular author (and long-time Brengle devotee) Bob Hostetler, Brengle's authentic voice remains strong, now able to more relevantly engage today's pursuers of holiness. Among Brengle's musing are reflections on the beauty and relevance of God's Word, insights into The Costs of Winning Souls, and thoughtful counsel to The Traveling Evangelist. The recent retiree in him offers A Word to Those Who Are Growing Old, while the aged man offers an open letter with advice to the young. In Ancient Prophets and Modern Problems Brengle's writings are some of his most personal and practical.

Also in the Brengle series:

Helps to Holiness, a straightforward look at entire sanctification, and a favorite of Brengle fans.
The Heart of Holiness, a combination of two classics, Heart Talks on Holiness and The Way of Holiness.
The Servant's Heart, offering The Soul-Winner's Secret and Love Slaves in one volume.
Come Holy Guest, a combination of Guest of the Soul and When the Holy Ghost Is Come
Resurrection Life and Power, a look at the holy life in the power of the resurrection of Jesus.

Bob Hostetler is an award-winning writer, editor, pastor and speaker from southwestern Ohio. His many books have garnered him two Gold Medallion Awards, four Ohio Associated Press awards, and an Amy Foundation Award, among others. Bob was ordained to the ministry in 1980 by The Salvation Army. He and his wife served in The Salvation Army from 1980-1992. In addition to his training for ministry with The Salvation Army, he earned degrees in English Bible from Cincinnati Christian University and English Communications from Bloomfield College. In 2000, Bob and his wife helped to co-found Cobblestone Community Church in Oxford, Ohio where he has served in leadership and teaching pastor roles.

▼▲
I'm the author/artist and I want to review Ancient Prophets and Modern Problems - eBook.
Back
Back