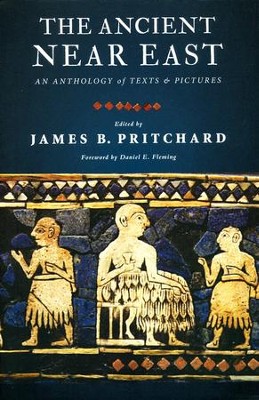 The Ancient Near East: An Anthology of Texts and Pictures

Edited By: James B. Pritchard
By: Edited by James B. Pritchard
Princeton University Press / Paperback
Write a Review
In Stock
Stock No: WW147260
Buy Item Our Price$38.99 Retail: Save 26% ($13.51)
In Stock
Quantity:
Stock No: WW147260
Princeton University Press / Paperback
Quantity:
Add To Cart
of These in Your Cart

▼▲
The classic anthology Ancient Near Eastern texts Relating to the Old Testament (ANET) edited by James B. Pritchard and his team of, now legendary, scholars has introduced generations of readers to the essential texts for understanding the peoples and cultures of the (mostly Iron-age (1300-600 B.C.) biblical world, and the people groups and stories that defined its culture. The translations found here remain widely regarded for their sensitivity to ancient near eastern culture and its myriad languages, even after almost a half-century of usage, review, and critique.

ANET was originally published in two separate volumes. In 1950 the first volume was released as stand alone project. In 1954, Pritchard also produced Ancient Near Eastern Pictures which contained pictures of relevant ancient near eastern archaeological discoveries. In 1958 ANET was re-released and officially became ANET Vol. 1, and was significantly expanded in a 1969 third edition. 1969 also witnessed the appearance of ANEP, 2nd Ed.. In 1975, the long awaited second volume of ANET appeared. But it has not been until now that the entire contents of both ANET and ANEP have been brought together in an affordable one-volume edition.

In all its forms, ANEThas been, and remains, a standard reference work and a critically important primary text document for cultural orientation to the Old Testament and scholarship on it. The new edition presents a slight restructuring of contents in order to achieve greater accessibility and navigation along with a brief, but comprehensive, foreward accounting for the various editions preceding this new 2010 edition.

With more than 130 different ancient texts and 300 photographs of ancient art, architecture, and artifacts, ANET provides a in-depth look at some of the most influential and famous texts in history such as The Epic of Gilgamesh, The Creation Epic (Enuma elish), The Code of Hammurabi, and The Baal Cycle. Other texts include historical, legal, and political writings; inscriptions, hymns, wisdom literature, oracles, prophecies, poetry, and more. Cultures and languages represented include Sumerian, Akkadian, Egyptian, Hittite, Ugaritic, Canaanite, and Aramaic.

For students of history, religion, the Bible, archaeology, and anthropology, this anthology provides a wealth of material for understanding the ancient Near East, the Bible, and the world from which it emerged.

▼▲
--Books & Culture
Pritchard enlisted some of the best scholars of his day to translate myths from Mesopotamia, novellas from Egypt, and calendars from Palestine. They provide an amazing backdrop to reread, and in some cases reinterpret, the Bible. Furthermore, the translations themselves are works of art...These translations have staying power. Not only do they convey the cultural environment of the biblical world but they do so with elegance and timeliness. The translators achieved an admirable balance of fidelity to the original compositions and imaginative creativity.

--Francesca Rochberg, University of California, Berkeley
There is no other anthology on the ancient Near East with this breadth of geographical and linguistic coverage, or with this variety of genres, from the literary and historical to the legal, epistolary, and religious.

▼▲
I'm the author/artist and I want to review The Ancient Near East: An Anthology of Texts and Pictures.
Back
Back