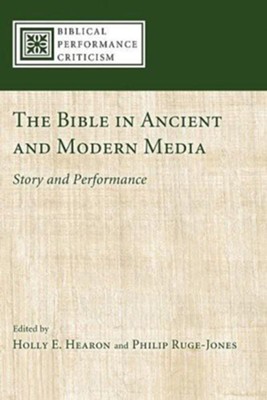 The Bible in Ancient and Modern Media: Story and Performance - eBook

▼▲
This cutting-edge volume has been brought together in honor of Thomas Boomershine, author, scholar, storyteller, innovator. The particular occasion inviting this recognition of his work is the twenty-fifth anniversary of the Society of Biblical Literature's section on The Bible in Ancient and Modern Media (BAMM), which Tom was instrumental in founding. For two and half decades this program unit has provided scholars with opportunities to explore and experience biblical material in media other than silent print, including both oral and multimedia electronic performances. This book explores many, though by no means all, of the issues lifted up in those sessions over the years. Contributors A. K. M. Adam Adam Gilbert Bartholomew Arthur J. Dewey Dennis Dewey Joanna Dewey Robert M. Fowler Holly E. Hearon David Rhoads Philip Ruge-Jones Whitney T. Shiner Marti J. Steussy Richard W. Swanson

▼▲
Holly E. Hearon is Associate Professor of New Testament at Christian Theological Seminary in Indianapolis. She is the author of The Mary Magdalene Tradition: Witness and Counter-Witness in Early Christian Communities. Philip Ruge-Jones is Associate Professor of Theology at Texas Lutheran University in Seguin, Texas. He is the author of The Word of the Cross in a World of Glory, and Cross in Tensions: Luther's Theology of the Cross as Theologico-Social Critique.

▼▲
I'm the author/artist and I want to review The Bible in Ancient and Modern Media: Story and Performance - eBook.
Back
Back