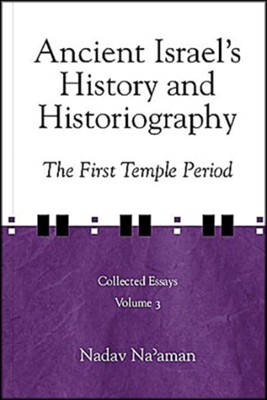 Throughout the past three decades, Nadav Na’aman has repeatedly proved that he is one of the most careful historians of ancient Canaan and Israel. With broad expertise, he has brought together archaeology, text, and the inscriptional material from all of the ancient Near East to bear on the history of ancient Israel and the land of Canaan during the second and first millenniums B.C.E. Many of his studies have been published as journal articles or notes and yet, together, they constitute one of the most important bodies of literature on the subject in recent years, particularly because of the careful attention to methodology that Na’aman always has brought to his work.

This final volume in the 3-volume set of Na’aman’s collected essays contains 29 essays. Among the topics addressed are: the sources available to Israel’s historians late in the first millennium B.C.E.; the reality behind the narratives relating to the history of the United Monarchy; the effect of the author’s own time on the composition of the histories of Saul, David, and Solomon; and the contributions of archaeology to the study of the tenth century B.C.E. In the course of covering these themes, Na’aman touches on topics such as history and historiography, textual and literary problems, historical geography, society, administration, cult, and religion.

▼▲
I'm the author/artist and I want to review Ancient Israel's History and Historiography: The First Temple Period.
Back
×