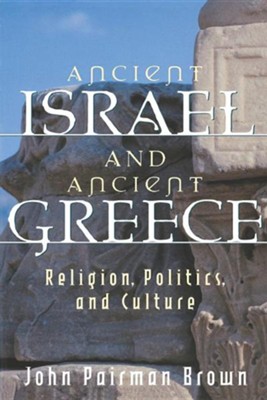 ▼▲
Western civilization has roots in both Athens and Jerusalem. What similarities did these societies share that made them so influential? How did they differ? Drawing vital comparisons and vivid contrasts between the Hebrew and Greek cultures, Brown investigates their historical, religious, linguistic, and literary links. 229 pages, softcover from Fortress.

The Israelites and the Greeks formed "the first free societies, cultivating rain-watered fields around a fortified citadel, recording their words about the human situation in a widely-accessible alphabetic script." With a keen eye for both comparisons and contrasts, John Pairman Brown investigates relationships between ancient Israel and Greece. In this intriguing and engaging work, he addresses historical, religious, linguistic, and cultural connections between these Mediterranean cultures. With erudition and humility, the author illuminates both Israelite and Greek writings and cultures. He brings a vast knowledge of the ancient Mediterranean and its languages to these studies, which will startle and entice the reader back to the ancient texts.

▼▲
I'm the author/artist and I want to review Ancient Israel and Ancient Greece: Religion, Politics, and Culture.
Back
Back