Skip to main content
CUSTOMER APPRECIATION SALE: Thousands of starry deals through 6/22!
Essays on Ancient Israel in Its Near Eastern Context: a Tribute to Nadav Na'aman
By: Yairah Amit
Stock No: WW061283 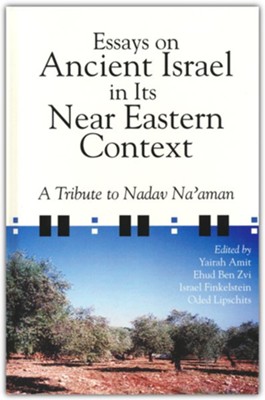 Essays on Ancient Israel in Its Near Eastern Context: a Tribute to Nadav Na'aman

By: Yairah Amit
Eisenbrauns / Hardcover
Write a Review
In Stock
Stock No: WW061283

With this volume, Professor Na’aman’s students and colleagues honor “one of the greatest historians of our time in the study of the biblical period” (from the Preface). Nadav Na’aman is Professor of Jewish History in the Biblical Period at Tel Aviv University (and has held the Kaplan Chair for the History of Egypt and Israel in Ancient Times since 2005). Over the past three decades, he has established a reputation for innovative and careful research in hundreds of memorable articles and monographs, many appearing in a recent three-volume set of his collected essays published by Eisenbrauns (Ancient Israel and Its Neighbors [2005]; Canaan in the Second Millennium B.C.E. [2005]; Ancient Israel’s History and Historiography [2006]).

▼▲
I'm the author/artist and I want to review Essays on Ancient Israel in Its Near Eastern Context: a Tribute to Nadav Na'aman.
Back
Back