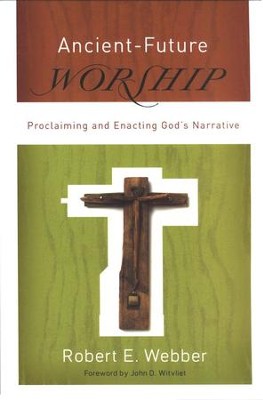 By: Robert E. Webber
More in Ancient-Future Series
Baker Books / 2008 / Paperback
4 out of 5 stars for Ancient-Future Worship (1 Review) Write a Review
In Stock
Stock No: WW066245

▼▲
Rooted in historical models and patristic studies, Webber's final volume in the respected Ancient-Future series examines how early Christian worship styles can be applied to the postmodern church. Evangelical and emerging congregational leaders and pastors will find this an invaluable, insightful resource for answering questions about---and creating---contemporary ways of expressing praise to God. 192 pages, softcover from Baker.

▼▲
With the many models of worship available, choosing a style to worship God can be a bit overwhelming. Is it better to go with traditional or contemporary models? Christians may find themselves asking how early believers worshiped and whether they can provide insight into how we should praise God today.
Rooted in historical models and patristic church studies, Ancient-Future Worship examines how early Christian worship models can be applied to the postmodern church. Pastors and church leaders, as well as younger evangelical and emerging church groups, will find this last book in the respected Ancient-Future series an invaluable resource for authentic worship.

▼▲
Robert E. Webber (1933-2007) was, at the time of his death, Myers Professor of Ministry at Northern Seminary in Lombard, Illinois, and served as the president of the Institute for Worship Studies. His many books include Ancient-Future Faith and The Younger Evangelicals.

▼▲
Robert E. Webber (1933-2007) was, at the time of his death, Myers Professor of Ministry at Northern Seminary in Lombard, Illinois, and served as the president of the Institute for Worship Studies in Orange Park, Florida. His many books include Ancient-Future Faith and The Younger Evangelicals.

▼▲
God has a story. Worship does God's story.

There is a crisis of worship today. The problem goes beyond matters of style--it is a crisis of content and of form. Worship in churches today is too often dead and dry, or busy and self-involved. Robert Webber attributes these problems to a loss of vision of God and of God's narrative in past, present, and future history. As he examines worship practices of Old Testament Israel and the early church, Webber uncovers ancient principles and practices that can reinvigorate our worship today and into the future.

The final volume in Webber's acclaimed Ancient-Future series, Ancient-Future Worship is the culmination of a lifetime of study and reflection on Christian worship. Here is an urgent call to recover a vigorous, God-glorifying, transformative worship through the enactment and proclamation of God's glorious story. The road to the future, argues Webber, runs through the past.

▼▲
Each book presents an issue related to faith and Christian practice from a particular point of view--that of drawing wisdom from the past and translating these insights into the present and future life of the church, its faith, worship, ministry and spirituality.

▼▲
Robert Webber, the recognized father of the Ancient-Future Faith Movement, offers this book as the final one in a series of five volumes which details what the movement encompasses.

This particular book by Webber is not as concerning as the first volume as he puts a face on the actual worship methodology found in A-F, which Webber defines as, the common tradition of the churchs worship in Word, Table, and song, practiced faithfully and communicated clearly in every context of the world (p. 168). In light of the challenges facing modern evangelicalism, Webber is calling for a recovery of the faith as expressed in the worship practices of the ancient church and its guardians of those traditions, the Eastern Orthodox and Roman Catholic churches.

Webber sees the necessity for returning to these ancient worship liturgies because of the breakdown of true worship todayand he has a point. He believes that most worship in evangelical services today is presentational worship which has turned worship into a program, a show, and entertainment (p. 25). Preaching has been reduced to the therapeutic or inspirational (p. 70, cf pp. 116-118). Webber correctly sees through this model of worship: Seeker-oriented contemporary churches argue that worship does not need to present the whole gospel. The purpose of worship, they say, is to get people in the door. Then, after they have gained a hearing, they present the gospel in small-group settings. This argument may be good marketing but it fails to understand the biblical purpose of worship (p. 85). Instead, biblical worship gathers to sing, tell, and enact Gods story of the world from its beginning to its end (p. 40).

To Webber, the missing link in todays theological thinking on worship is reflection on the incarnation and its connection to every aspect of Gods story (p. 35). In this vein Webber criticizes the evangelicals emphasis on creationsinredemption and replaces it with creationincarnationrecreation (pp. 37, 86, 169). This is important to Webber because he believes the evangelical emphasis, traceable to Augustine, over concentrates on the sacrificial view of the atonement to the exclusion of the Christus Victor theme in which the incarnate Son of God triumphs over sin, death and the powers of evil (pp. 169-170). In Webbers mind this has led to an individualistic form of Christianity in which people are concerned too much about redemption from sin and not enough about the rescue of fallen creation in the new heaven and earth (the new creation).

This sounds like a useful adjustment in our theological thinking until we learn where it leadsthe redemption of the whole world (p. 37). What does Webber mean by this? It has to do with Gods rescue of the entire created order and the establishment of his rule over all heaven and earth (pp. 57-58). Deliverance, Webber states, is for the sake of the world (p. 59). He complains that worship now places greater attention on the individuals condition before God. The vision of God to reclaim the whole world and redeem all flesh and matter through the victory of Christ over sin and death scarcely appears (p. 77, cf. pp. 90, 94, 96-97, 121 emphasis his). These statements are problematic, especially in light of the fact that Webber never clearly defines the gospel. Is he saying that all mankind, along with all matter, will be redeemed and re-created? If so, then the message of personal redemption is indeed an individualistic over-emphasisin fact, not the point of the cross at all. However, if only the true believer in Christ will be redeemed because of the sacrificial death of Christ, then is this not the central purpose of Calvary?

While there is much worthy of comment in Ancient-Future Worship, I will limit myself to thoughts on two areas: Scripture and the Lords Supper. Concerning Scripture Webber clearly accepts the Roman Catholic position, I affirm the Bible as the final authority in all matters of faith and practiceHowever I draw on the foundational interpretation of the Church Fathers and the creeds and practices of the ancient church (p. 19, cf. p. 68). In other words, final authority in reality does not rest in Scripture but in the church. Of further concern is Webbers postmodern approach to Scripture. He calls for us to resist intellectual analysis that he believes stems from the Enlightenment and read the Bible as true but not for truths (p. 124). In the context of the Lords Supper this approach is observed as we are encouraged to free our thinking from reason and science and embrace mystery (pp. 146-148). We are to read the Bible holistically, relationally, and passionately (p. 125), rather than intelligently and rationally, for, the intellect always dissects, makes judgments, analyzes, and sifts, but the heart listens, sees, feels, loves, fears, and believes (p. 127). This is at best a false dichotomy between head and heart, and certainly an overreaction to those who might over systematize the Scripture to the exclusion of life applications.

Webber believes that ancient worship (and he strongly prefers Eastern over Roman liturgy) centered not around Scripture but around the Lords Table; he writes much on this subject. Webber rejects all the major positions on the purpose and nature of the Table (pp. 134, 142, 148) and claims that the ancient view is, When bread and wine are received in faith, we are transformed. Bread and wine nourish our union with Jesus. It transforms us into his image and likeness (p. 140). He turns to quotes from Ignatius and Justin for support (pp. 137-140), but I could find little in these quotes that made his point. More importantly, to Webber the Table is simply a mystery (p. 142). His position is well represented as he quotes a note sent by one of his students, Would you consider explaining and defending your view of the doctrine of real presence?...If it is to serve as the foundational assertion from which you deduce the meaning and value of the Eucharist, it would be helpful to me to read some discussion and support of it before Im asked to build on it (p. 134). This seems like a most reasonable request, however, to Webber it is apparently too modern and is simply rejected: What this student is looking for is a rational explanation of Christ enters us and we him, in taking of bread and wine (p. 134). Later he writes, We are called, not to understanding, but to the fixed gaze of contemplation and to an active participation in the life of Christ (p. 148).

While I will agree that there will always be much that we never totally comprehend about our God and His ways (mystery), Webbers approach abandons the clear approach of Scripture itself and leaves far too much to imagination and subjective mysticism. Webber is asking us to accept a form of Christianity not emerging from Scriptures but from the practices of men years after God had spoken His final word in the New Testament. This is the very approach that led to corruption in the ancient church and ultimately necessitated the Reformation. Why should we follow the same mistaken paths of the past? -- Gary Gilley, www.ChristianBookPreviews.com

▼▲
I'm the author/artist and I want to review Ancient-Future Worship.
Back
Back