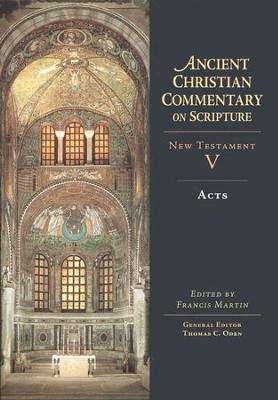 ▼▲
While at least 40 early church authors commented on the Book of Acts by Luke, only three of these works survive in their entirety. Featuring substantial excerpts from John Chrysostom, Bede, Arator, and many others, this volume also includes several passages translated into English for the first time, as well as a chronology, biographical sketches, and various indices. 400 pages, hardcover from InterVarsity.

▼▲
The Acts of the Apostles—or more in keeping with the author's intent, the Acts of the Ascended Lord—is part two of Luke's story of "all that Jesus began to do and teach." In it he recounts the expansion of the church as its witness spread from Jerusalem to all of Judea and Samaria and to the ends of the earth. While at least forty early church authors commented on Acts, the works of only three survive in their entirety—John Chrysostom's Homilies on the Acts of the Apostles, Bede the Venerable's Commentary on the Acts of the Apostles and a long Latin epic poem by Arator. In this Ancient Christian Commentary on Scripture volume, substantial selections from the first two of these appear with occasional excerpts from Arator alongside many excerpts from the fragments preserved in J. A. Cramer's Catena in Acta SS. Apostolorum. Among the latter we find selections from Basil the Great, Gregory of Nazianzus, Gregory of Nyssa, Ephrem the Syrian, Didymus the Blind, Athanasius, Jerome, John Cassian, Augustine, Ambrose, Justin Martyr, Irenaeus, Theodoret of Cyr, Origen, Cyril of Jerusalem, Cyril of Alexandria, Cassiodorus, and Hilary of Poitiers, some of which are here translated into English for the first time. As readers, we find these early authors transmit life to us because their faith brought them into living and experiential contact with the realities spoken of in the sacred text.

▼▲
Francis Martin is a priest in the Archdiocese of Washington, D.C. He is research fellow in Catholic biblical studies at the Intercultural Forum for Studies in Faith and Culture at the Pope John Paul II Cultural Center in Washington, D.C. He is also spiritual advisor to the Mother of God Community in the Archdiocese of Washington. Thomas C. Oden (19312016) was a pioneering theologian and served as the architect and general editor for the Ancient Christian Commentary on Scripture. He was also the general editor of the Ancient Christian Doctrine series and the Ancient Christian Devotional series, as well as a consulting editor for the . A prolific writer and seasoned teacher, Oden also served as the director of the Center for Early African Christianity at Eastern University in Pennsylvania and was active in the Confessing Movement in America, particularly within the United Methodist Church.

"Contemporary Christians would do well to draw the hermeneutical circle broadly enough to include not only cross-cultural voices from around the world but also the voices to be found in the Ancient Christian Commentary series. This is an excellent sermon-preparation resource for pastors." -- Christian Century, May 2, 2006

▼▲
I'm the author/artist and I want to review Acts: Ancient Christians Commentary on Scripture, NT Volume 5 [ACCS].
Back
Back