Skip to main content
SPRING CYBER EVENT STARTS NOW: And it's a really BIG deal! Up to 88% off through 5/24>
Ancient Babylonian Medicine: Theory and Practice
By: Markham J. Geller
Stock No: WW126526 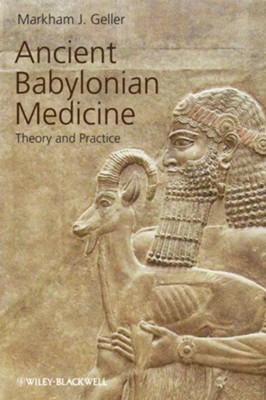 Markham J. Geller is Professor of Semitic Languages at University College London and Guest Professor at the Freie Universität Berlin. He is the author of Evil Demons: Canonical Utukku Lemnutu Incantations (2007) and co-editor of Disease in Babylo-nia (2007)and Imagining Creation (2008).

“Ancient Babylonian Medicineis an important and fascinating book which not only provides a much needed introduction to the theory and practice of medicine in ancient Mesopotamia but also makes a significant contribution to the study of ancient Mesopotamian scholarship. It is clearly and elegantly written, nicely illustrated, and well produced.”  (Aestimatio, 1 June 2013)

"This book is a rare achievement: as a scholarly work, it provides an important addition to the history of medicine; for the general reader, it is a fascinating introduction to the theory and practice of medicine in Mesopotamian society." (Antiquity Reviews, 2011)

"In sum, Geller has written a remarkably useful and thoughtful volume on what is an elusive topic. Assyriologists and historians of medicine will gain much from reading this work and it will certainly become required reading for the discipline." (Bryn Mawr Classical Review, 19 August 2011)

"Markham J. Geller brings a welcome, dual expertise now rather rare in medical history (he is an MD as well as a Rabbi and Professor of Semitic Languages), and some of his previous studies of Talmudic texts led him to the discovery of medical loan-words that turned out to be embedded Akka-dian dating from the period known as the "Babylonian Captivity". (Times Literary Supplement, 21 January 2011)

"He appends a commentary probably composed by the Uruk scholar Iqisa, who flourished in the latter part of the fourth century BC; the transcription, and possibly the translation, is from a 1924 edition by Campbell Thompson." (SciTech Book News, December 2010)

▼▲
I'm the author/artist and I want to review Ancient Babylonian Medicine: Theory and Practice.
Back