Skip to main content
SPRING CYBER EVENT STARTS NOW: And it's a really BIG deal! Up to 88% off through 5/24>
Ancient Rome: How it Affects You Today: An Uncle Eric Book, 2nd Edition
By: Richard J. Maybury
Stock No: WW617566 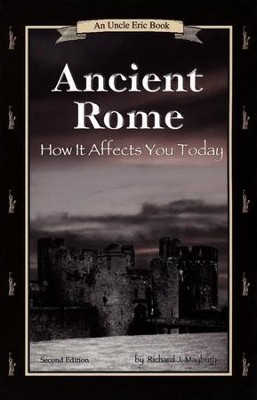 Ancient Rome: How it Affects You Today: An Uncle Eric Book, 2nd Edition

▼▲
Those who know the past are not always doomed to repeat it...written in the same letter-format as other books, "Uncle Eric" this time tackles the lessons learned from the fall of the Roman Empire. Picking apart the meaning and similarities between the Roman economy, government, fighting for "interests", and the Roman model of "blood, conquest, empire, the glory of war", Maybury advocates returning to the roots of Western Civilization--Common Law. 110 pages, softcover. Middle School-Adult.

▼▲
I'm the author/artist and I want to review Ancient Rome: How it Affects You Today: An Uncle Eric Book, 2nd Edition.
Back
Back