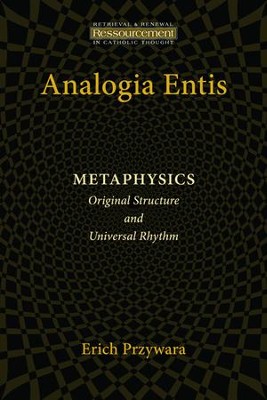 ▼▲
Although Erich Przywara (1889–1972) was one of the preeminent Catholic theologians of his time and a profound influence on such people as Hans Urs von Balthasar and Joseph Ratzinger, he has remained virtually unknown in North America. This volume includes Przywara’s groundbreaking Analogia Entis, originally published in 1932, and his subsequent essays on the concept analogia entis -- the analogy between God and creation -- which has currency in philosophical and theological circles today.

▼▲
Erich Przywara (1889-1972) was an influential German Jesuit theologian who himself was strongly influenced by Augustine, Aquinas, Newman, and the phenomenological philosophy of Edmund Husserl and Max Scheler.
John Betz teaches systematic theology at University of Notre Dame, Indiana.
David Bentley Hart is a philosopher, theologian, writer, and cultural commentator who has taught at the University of Virginia, Duke University, and the University of Notre Dame. His other books include The Beauty of the Infinite: The Aesthetics of Christian Truth; A Splendid Wickedness and Other Essays; and Atheist Delusions: The Christian Revolution and Its Fashionable Enemies, which was awarded the Michael Ramsey Prize in Theology in 2011.

▼▲
Alasdair MacIntyre
-- University of Notre Dame
"The publication of this excellent translation of Erich Przywara's difficult and contentious book is an important event. Analogia Entis poses an inescapable problem for theologians, that of how we must understand the relationship of God's being to human beings in order for us to be able to talk about God. Przywara was a notable influence on some of the greatest Protestant and Catholic theologians of the twentieth century. We need to learn from him if we are to understand them."

John Milbank
-- University of Nottingham
"At last English readers have available a translation of one of the great masterworks of twentieth-century theology and philosophy, giving them a much better sense of the course of both Catholic and Protestant thought since the inter-war period. John Betz and David Bentley Hart have done a remarkable
job of rendering Przywara's Analogia Entis into highly readable English without losing any of the sense or nuances of the German original."

Reinhard H�tter
-- Duke Divinity School
"Arguably the most brilliant and simultaneously most enigmatic Catholic intellectual of the earlier part of the twentieth century, Erich Przywara argued eye to eye with Edmund Husserl, Max Scheler, and Martin Heidegger, challenged Karl Barth, and through his famous lectures inspired a host of influential Catholic thinkers. . . . Finally, his magnum opus, Analogia Entis, is available in lucid English prose -- an intellectual event of the first order. We are deeply indebted to John Betz and David Bentley Hart for this splendid labor of love."

David Burrell
-- University of Notre Dame
"Be prepared to let a predilection for poetry spice austere argument, to retrieve the pristine dynamic of analogy as Aquinas invariably used it to render philosophy as a handmaid of faith."

Reviews in Religion and Theology
"An important piece of twentieth-century theology that has not been given enough attention in the English-speaking world due in part to the abstract nature of the subject matter and the difficulty that nonnative speakers have in reading Przywara's German. Przywara's approach to the doctrine of the analogia entis is both highly original as well as based on tradition. It is therefore in its own right an important piece of theology, but as an influence on the theology of Hans Urs von Balthasar and Karl Rahner, and as Karl Barth's primary Catholic interlocutor, Przywara's theology is also important for understanding the moves made in twentieth-century theology more generally. . . . This English translation of Analogia Entis will facilitate such access and hopefully bring Przywara into a more prominent place in discussions surrounding twentieth-century theology."

Horizons
"The translators are to be congratulated for having resurrected this treasure of a book so well and for giving it a new life in English at the junction of philosophy and theology we have come to. One can only hope that it will be read and studied as widely as it deserves."

▼▲
I'm the author/artist and I want to review Analogia Entis: Metaphysics: Original Structure and Universal Rhythm.
Back