We are OPEN and SHIPPING - click here for shipping estimates
PRE-SUMMER CYBER SALE EXTENDED thru 6/1 ~ Over 2,500 items up to 90% off
The Anabaptists and Contemporary Baptists: Restoring New Testament Christianity
Edited By: Malcolm B. Yarnell III 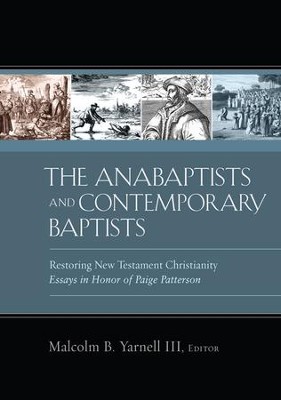 ▼▲
An examination of the Radical Reformation and what this movement has to offer contemporary Christianity. A Festschrift in honor of Paige Patterson.

What do the sixteenth century Anabaptists have to offer Baptists and other free-church evangelicals today? According to the essays in this volume, studying the lives and theology of the leading evangelical Anabaptists will encourage readers to dig deeper into the Bible, count the cost of discipleship to Jesus Christ, and commit oneself to engaging the world with the gospel.

▼▲
According to the scholarly and pastoral authors of this essay collection, sixteenth-century Anabaptists have much to teach Baptists and other Free Church evangelicals.

A study of the lives and theology of evangelical Anabaptists encourages a reader to dig deeper into the Bible, count the cost of discipleship to Jesus Christ, and commit oneself to engaging the world with the gospel of Jesus Christ. The theological commitment of Anabaptists like Balthasar Hubmaier to the supremacy of the Word of God encourages us to live by the motto that "the truth is unkillable." The example of Leonhard Schiemer, who understood that following Jesus meant taking up the cross of Jesus Christ, prepares one for the joyous difficulty of a life of discipleship. The loving attitude, missionary fervor, and desire for communal integrity of leaders like Hans Denck and Michael Sattler draws us into a stronger commitment to share the gospel from an authentically Christian heart and life.

Finally, such great contemporary leaders as Paige Patterson and Rick Warren have drawn upon the legacy of the evangelical Anabaptists to build great churches and seminaries. Their thoughts and stories are included here to encourage the recovery of the Anabaptist vision among Baptists and other free churches today.

These papers also serve as a Festschrift honoring the lifelong work of Paige Patterson, president of Southwestern Baptist Theological Seminary, in the study of the Radical Reformation. Indeed, he has inspired the recovery of the Anabaptist vision as a means of restoring New Testament Christianity.

Malcolm B. Yarnell III is professor of Systematic Theology, director of the Oxford Study Program, and director of the Center for Theological Research at Southwestern Theological Seminary in Fort Worth, Texas. His books include First Freedom: The Baptist Perspective on Religious Liberty, co-edited with Thomas White and Jason G. Duesing (B&H Academic).

▼▲
Few groups have been much more misunderstoodand misrepresented than the Anabaptists. Yes, there were the bizarre fringe groups that make for an easy target. However, there also was an evangelical wing that honored Christ, loved the gospel, and recaptured teh biblical teachings of a free, regenerate church and a disciplined body. And many sealed this witness with their blood in martyrdom. You will find their story and theology in this book. Prepare to be blessed, inspired, and convicted. It will be good for your soul.
-Daniel L. Akin,
Southeastern Baptist Theological Seminary

This volume is the record of a new generation's scholarship on Anabaptism as the crucial interpretive key to the New Testament for Baptists. Its authors demonstrate a sure scholarly familiarity with the breadth of Anabaptist studies as well as offering original research, especially on Hubmaier and Anabaptism in Italy. This distillation of current Baptist thinking provides a fruitful point encounter between Baptists and Mennonites in both academy and church.
-John D. Rempel,
Toronto mennonite Theological Centre

Paige Patterson is the most significant, revolutionary figure in Southern Baptist life, probably in our history. He prophetically called a convention of churches back to orthodoxy, contra a bureaucracy intent on stopping him. And, because in his voice the people heard the old, old story, he won. This delightful volume examines those things that fuel this prophet's fire. It is well worth reading.
-Russell D. Moore,
Southern Baptist Convention

Regardless of where you stand on the vexed debate over its historical relationship between sixteenth century Anabaptists and the emergence of the Baptists a century later, it is clear that the contemporary North American heirs of these two traditions have largely gone their separate ways.Throughout his remarkable career, Paige Patterson has worked tirelessly to change that reality. These essays offer a worthy tribute to Patterson and his lifelong passion to mine the theological riches of the Anabaptist movement and to forge new bridges with contemporary Anabaptist groups. This volume provides ample evidence of a significant historical renaissance among Baptist scholars, whose passion for church renewal is as evident as their commitment to a careful reading of the sixteenth-century sources. I highly recommend The Anabaptists and Contemporary Baptists.
-John D. Roth,
Goshen College

In this scholarly collection of essays dealing with the Anabaptists, who are clearly spiritual kin to modern-day Baptists in certain key areas, the life and witness of Dr. Paige Patterson is rightly honored. It is appropriate that the essays deal with the Anabaptists, for Dr. Patterson has been ardent in his promotion of the reading of and about these followers of the Lord Jesus, confident that they have much to teach contemporary Baptists and indeed all Christians. And like those radical disciples of the sixteenth century, Dr. Patterson has sought to be passionately loyal to his Lord in his day--and for that passion and loyalty, there are many, like myself, who are deeply and eternally grateful.
-Michael Haykin,
The Southern Baptist Theological Seminary

▼▲
I'm the author/artist and I want to review The Anabaptists and Contemporary Baptists: Restoring New Testament Christianity.
Back
×
Back
×