Skip to main content
SPRING CYBER EVENT STARTS NOW: And it's a really BIG deal! Up to 88% off through 5/24>
An Uncommon Protector - eBook
By: Shelley Shepard Gray
Stock No: WW86290EB 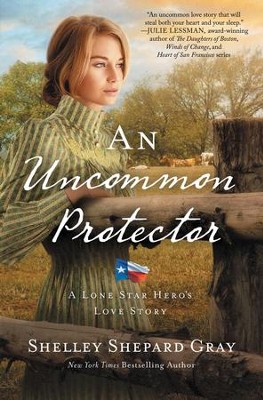 The first novel in the Lone Star Hero's Love Story Series....Post Civil War, Laurel Tracey had lost her family and was left with a two hundred acre ranch to run on her own. Thomas Baker was a former soldier who was unable to pay off a few of his fines, and ended up in jail because of it. Since she needed help on the ranch, she paid off his debt, got him released and hired him for one year to work her ranch. When Laurel’s life is threatened, her trustworthy hired hand turns out to be just the hero she needs.

Overwhelmed by the responsibilities of running a ranch on her own, Laurel Tracey decides to hire a convict—a man who’s just scary enough to take care of squatters and just desperate enough to agree to a one year post.

The years following the war have been hard on Laurel Tracey. Both her brother and her father died in battle, and her mother passed away shortly after receiving word of their demise. Laurel has been trying to run her two hundred acre ranch as best she can.

When she discovers that squatters have settled in her north pasture and have no intention of leaving, Laurel decides to use the last of her money to free a prisoner from the local jail. If she agrees to offer him room and board for one year, he will have to work for her to pay off his debt.

Former soldier Thomas Baker knows he’s in trouble when he finds himself jailed because he couldn’t pay a few fines. Laurel’s offer might be his only ticket out. Though she’s everything he ever dreamed of in a woman—sweet and tender-hearted, yet strong—he’s determined to remain detached, work hard on her behalf, and count the days until he’s free again.

Shelley Shepard Gray is a New York Times and USA Today bestselling author, a finalist for the American Christian Fiction Writers prestigious Carol Award, and a two-time HOLT Medallion winner. She lives in southern Ohio, where she writes full-time, bakes too much, and can often be found walking her dachshunds on her town's bike trail.  Find Shelley on her website: ShelleyShepardGray.com; on Facebook: ShelleyShepardGray; Twitter: @ShelleySGray.

▼▲
“Gray’s ardent fans will line up for this one.” -- Library Journal

'A sweet historical romance with charming, caring characters with an interesting story. The female lead, Laurel, is a breath of fresh air. She isn't the typical woman of the 1860s; she is gutsy and tough. The storyline is fast-paced and believable with memorable scenes. Gray brings the past alive with her novels. This one is a keeper.' -- RT Book Reviews, 4 stars

'This inspiring story about realizing one’s own worth in the Lord should be recommended to fans of Deanne Gist.' -- CBA Market book reviews

▼▲
I'm the author/artist and I want to review An Uncommon Protector - eBook.
Back
Back