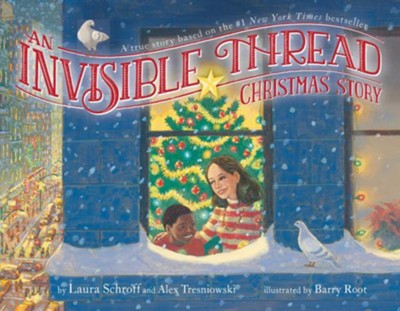 ▼▲
From the #1 New York Times bestselling authors of An Invisible Thread comes the true, heartfelt, and extraordinary story of how one woman’s decision to help a boy on the street changed both of their lives forever.

In this sweet picture book, Laura retells the first Christmas that she and Maurice spent together. She shares how Maurice gave her a small white bear—as she later learns, the only thing he had that he could truly call his own—to show her how grateful he was for their friendship.

This heartwarming tale captures the true meaning of the holidays and will be one you’ll want to share with your family year after year as a reminder that a gift from the heart is always the best present under the tree.

▼▲
Laura Schroff is a former advertising sales executive who worked for over thirty years with several major media companies and publications, including Time Inc. and People. Her book, An Invisible Thread, became an instant New York Times bestselling book and later was a #1 New York Times and international bestseller. As a keynote speaker at over 300 events for schools, charity organizations, libraries, and bookstores, Laura encourages her audience to look for their own invisible thread connections and highlights the importance of opening up their eyes and hearts to the opportunities where they can make a difference in the lives of others. She lives in Westchester, New York, with her feisty poodle, Emma.

Alex Tresniowski is a writer who lives and works in New York. He was a writer for both Time and People magazines, handling mostly human-interest stories. He is the author or coauthor of more than twenty books.  For more about this story and the author, please visit AlexTres.com.

Barry Root is the illustrator of many books for children, including Gumbrella, which he also wrote; Dream Big; By My Brother’s Side; and Game Day, which received a Christopher Award in the category of books for young people. He lives with his family in Quarryville, Pennsylvania.

▼▲
I'm the author/artist and I want to review An Invisible Thread Christmas Story.
Back