Skip to main content
An Introduction to Ugaritic
By: John Huehnergard
Stock No: WW568202 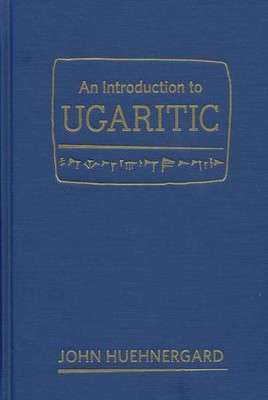 An Introduction to Ugaritic

By: John Huehnergard
Hendrickson Publishers / 2012 / Hardcover
5 out of 5 stars for An Introduction to Ugaritic (1 Review) Write a Review
In Stock
Stock No: WW568202

▼▲
An Introduction to Ugaritic is a deductive style Ugaritic grammar first written 25 years ago. Now updated, it is designed for students with familiarity with biblical Hebrew, and draws examples for the pedagogy of that language to instruct students in Ugaritic.

The plan of this text is simple: the grammar is presented in detail followed by short exercises that reinforce main points and introduce vocabulary.

Sample texts are included following the text's lessons, and they noted for genre, glosses are given, and explanatory notes included.

Highly respected linguist John Huehnergard brings his command of and vast knowledge in the field of comparative Semitic linguistics to this introductory grammar. Every aspect of the grammar is enriched by his broad understanding, while maintaining an unexcelled directness and order to the learning of the fundamental grammar of Ugaritic.

Designed for students already familiar with Biblical Hebrew, this grammar contains the information necessary to help them become proficient in Ugaritic, and includes exercises to assist in learning basic grammar before commencing work with the actual Ugaritic texts. It is set apart from other gram¬mar books by its immense understanding of comparative Semitic grammar, and the concise and accurate manner in which Huehnergard presents the information.

Special Features:
• A glossary of all Ugaritic words used in the grammar
• An appendix by Ugaritologist John Ellison on the scribal formation of the Ugaritic abecedaries
• A number of full-color photographs of Ugaritic tablets
• Keys to the exercises
• Bibliographic information and indexes

▼▲
In this new work, An Introduction to Ugaritic, John Huehnergard has drawn on his vast research in Ugaritic and other Semitic languages to produce a superb, student-friendly textbook of the Ugaritic language. The sketch of Ugaritic grammar is first-rate. It is provided with vocalizations of Ugaritic words as well as paradigms throughout (which are nicely consolidated in an appendix). A particular helpful feature of the grammar is the listing of noun-types and stem-vowels for verbs. Huehnergard's attention to student needs is particularly evident in his chapter on basic vocabulary and English to Ugaritic practice exercises, which will help beginning learners make the transition from the grammar to reading texts. Fourteen texts drawn from different genres are accompanied by 44 color photographs and complemented by a glossary that provides cognates from other languages. Other notable features include the description of the alphabetic script (especially by John L. Ellison in an appendix); comparisons with grammatical features in other languages (especially Biblical Hebrew); keys to the exercises and the texts selected for reading; and fine listings of bibliographical resources. This work is most highly recommended; it is a "must-have" book for Ugaritic studies. - Mark S. Smith, Skirball Professor of Bible and Ancient Near Eastern Studies, New York University

▼▲
I'm the author/artist and I want to review An Introduction to Ugaritic.
Back
Back