Skip to main content
An Ideology of Revolt
By: Jerome H. Neyrey
Stock No: WW352690 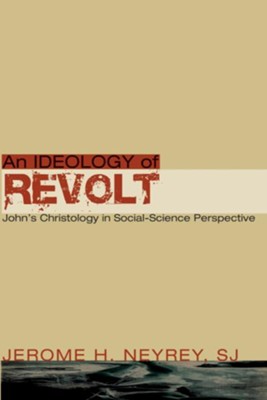 An Ideology of Revolt

▼▲
Behind the triumphant proclamation of Jesus as God in the Fourth Gospel stands a history of alienation, intense conflict, and crisis. Jerome Neyrey unearths that history by showing how the Gospel's Christology functions as a cipher for the Johannine community's estrangement -- and eventual revolt -- from its roots in the synagogue. In Part One, Neyrey offers a fresh, full exegesis of the controversies over Jesus's eschatological and divine powers, which underlay the Gospel's confession of Jesus as equal to God. Part Two deftly employs social-science modeling for a rigorous and enlightening reconstruction of the worldview of John's community as it evolved through stages of controversy that propelled Christians into an exaltation of Christ and a radical devaluation of this world -- an ideology of revolt. A paradigm of interdisciplinary biblical research, An Ideology of Revolt discloses the irony and scandal of John's community and of John's Christ. This is a daring, intriguing, and notable book, the first to treat a Johannine theme employing the methods of social-science research. While buiding on recent insights into the Gospel and its setting, Neyrey forges beyond what has been proposed to a new and bold suggestion for ways of penetrating the enigmatic view of Christ found in John. This book will become an exemplary study of Johannine theology that will provoke and lead scholarly research in years to come. The controversy it is bound to stir will help to refine methods of invesitgating other Johannine themes. -- Robert Kysar, Lutheran Theological Seminary, Philadelphia Jerome H. Neyrey, SJ, was educated at St. Louis University (BA, MA); Regis College, Toronto (MDiv and MTh); and Yale University (PhD). He is currently Professor of New Testament at the University of Notre Dame. His other books include 'The Resurrection Stories', 'The Passion According to Luke', and 'Give God the Glory: Ancient Prayer and Worship in Cultural Perspective' (2007).

▼▲
I'm the author/artist and I want to review An Ideology of Revolt.
Back