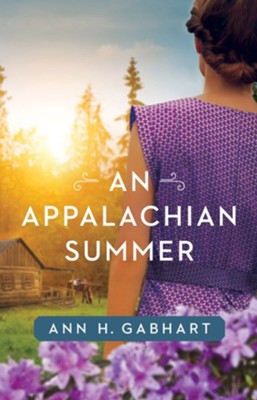 After the market crash of 1929 sent the country’s economy into a downward spiral that led to the Great Depression, the last thing Piper Danson wants is to flaunt her family’s fortune while so many suffer. Although she reluctantly agrees to a debut party at her parents’ insistence, she still craves a meaningful life over the emptiness of an advantageous marriage.

When an opportunity to volunteer with the Frontier Nursing Service arises, Piper jumps at the chance. But her spontaneous jaunt turns into something unexpected when she falls in love with more than just the breathtaking Appalachian Mountains. Romance and adventure are in the Kentucky mountain air as Gabhart weaves a story of a woman yearning for love but caught between two worlds—each promising something different.

▼▲
In 1933 Louisville, Kentucky, even the ongoing economic depression cannot keep Piper Danson's parents from insisting on a debut party. After all, their fortune came through the market crash intact, and they've picked out the perfect suitor for their daughter. Braxton Crandall can give her the kind of life she's used to. The only problem? This is not the man--or the life--she really wants.

When Piper gets the opportunity to volunteer as a horseback Frontier Nursing courier in the Appalachian Mountains for the summer, she jumps at the chance to be something other than a dutiful daughter or a kept wife in a loveless marriage. The work is taxing, the scenery jaw-droppingly gorgeous, and the people she meets along the way open up a whole new world to her. The longer she stays, the more an advantageous marriage slips from her grasp. But something much more precious--true love--is drawing ever closer.

Bestselling author Ann H. Gabhart invites you into the storied hills of Eastern Kentucky to discover what happens when one intrepid young woman steps away from the restrictive past into a beautiful, wide-open future.

▼▲
Ann H. Gabhart is the bestselling author of several Shaker novels--The Refuge, The Outsider, The Believer, The Seeker, The Blessed, and The Gifted--as well as other historical novels, including Angel Sister, These Healing Hills, River to Redemption, and An Appalachian Summer. She and her husband live on a farm a mile from where she was born in rural Kentucky. Ann enjoys discovering the everyday wonders of nature while hiking in her farm's fields and woods with her grandchildren and her dogs, Frankie and Marley. Learn more at www.annhgabhart.com.

Can you provide a brief description of your newest novel, An Appalachian Summer?
Piper Danson has long been in love with Jamie Russell, a young man in her social circle, but after his
family loses their fortune in the stock market crash on Black Tuesday, Piper’s father no longer considers him someone Piper can marry. Instead her father has a different man in mind for her future husband. Piper isn’t ready to accept her father’s plan for her life. She wants to try something different before she settles into the expected role of a debutante seeking an advantageous marriage. When she hears Mary Breckinridge speak about her work with nurse midwives in the Eastern Kentucky Appalachian Mountains, Piper is ready to shed expectations and find adventure and new vistas as a volunteer courier with the Frontier Nursing Service. The couriers take care of the nurses’ horses, run errands, and assist the nurse midwives in various other ways. Piper escapes her father’s matchmaking by going to the mountains where she steps into a completely different world. When Jamie follows her to the mountains and then so does Braxton Crandall, the man her father wants her to marry, Piper must make some difficult choices.

An Appalachian Summer takes place in the middle of the Great Depression. Why did you choose this
time period for your story?
The Great Depression was a hard time for our country, but while many suffered, some of the upper class managed to maintain their privileged lifestyle. Mary Breckinridge, the founder of the Frontier Nursing Service in the Appalachian Mountains, could have been one of those privileged people, but instead she used her money and her influence to bring better healthcare to mothers and children in Eastern Kentucky. She continued through the Depression, somehow managing to get donations to keep her midwifery service going even during those lean years. The young women who volunteered as couriers to help the nurse midwives were generally daughters of women in society Mrs. Breckinridge called on to support her work. The time period of the Great Depression offered conflict and contrast that I believe add interest to my story.
Your main character, Piper Danson, is especially conscious of her good fortune during the
Depression while many around her suffered. Why did you choose to have Piper among the elite few
whose fortunes remained intact?
Had Piper’s family not been able to continue to have money for their needs and wants, Piper wouldn’t have had the opportunity to volunteer her time to the Frontier Nursing Service. She would have been like so many others who were trying to find jobs or ways to survive in the depressed economy. At the same time, I did want Piper to be aware that not all were as fortunate as she was. That added to her desire to do something different and not simply follow the path most young women in her situation might take.


Piper joins the Frontier Nursing Service as a courier in order to escape the arranged marriage that
her parents desired for her. Can you explain what the FNS is, and what kind of women became
couriers?
Mary Breckinridge was part of a socially prominent family with roots in Kentucky, but after the tragedy of
losing her two children, one at four years old to an illness and the other as a newborn, she turned her energy to doing something to help bring better healthcare to mothers and children in poverty-stricken areas.
She worked as a nurse in World War I and observed the French midwifery system. She then received midwifery training in England, since America had no midwifery schools at that time. She rode miles on horseback through the Appalachian Mountains, talking to the people and all the granny midwives—women untrained but depended on for healthcare because no doctors were available—to determine where to establish her Frontier Nurse Service. She chose Leslie County in the heart of the Appalachian Mountains and brought in midwives from England to take healthcare to the people by going on horseback up into the mountains to their cabins. Later, when the English midwives felt they should return to England to help in the war effort, Mrs. Breckinridge established a midwifery school in Hyden, Kentucky. Because of the poverty in the area, the nurses collected very little money in payment for their services, andthis payment was often in homegrown food items or services such as cleaning away weeds around the nursing centers. Mrs. Breckinridge raised money to support the Frontier Nursing Services by appealing to
society women who would have teas or other gatherings for her to tell about her nurse midwives and their mountain patients. One of her supporters was Mrs. Henry Ford. In order to free up the nurses to allow them to devote more time to the healthcare of their patients, Mrs. Breckinridge began recruiting the daughters of her society friends to volunteer their time to care for the nurses’ horses, escort visiting donors to the outlying clinics to see what their contributions were doing, and other mundane tasks. Most of these young women had lived privileged lives with servants to attend to their needs, but they eagerly came to the mountains to muck out horse stalls, paint walls, deliver messages, and sometimes assist the nurse midwives when they were delivering babies. The young women, thrilled with their mountain adventures, went home full of stories of what they’d done. It was such a life-changing experience for many of them that they were never the same and much more open to adventures of other kinds. The chance to volunteer as a courier soon became a highly sought-after opportunity with a waiting list. In time, women who had once been Frontier Couriers began signing up their infant daughters in order for them to have the same experience in the mountains as couriers as they had had. The Frontier Nursing Service has seen many changes over the years. As roads were finally built up into the
mountains, the horseback nurse midwives began traveling in jeeps, and then as more healthcare providers came into the mountains, the Service changed into the Frontier Nursing University to train midwives, nurse
practitioners, and other healthcare positions. Mary Breckinridge’s log house in Wendover, Kentucky, the headquarters for her Frontier Nursing Service, is now a National Historic Site and Bed and Breakfast.

▼▲
I'm the author/artist and I want to review An Appalachian Summer.
Back
Back