Skip to main content
CUSTOMER APPRECIATION SALE: Thousands of starry deals through 6/22!
An Anthology of Greek Prose
By: D.A. Russell
Stock No: WW721226 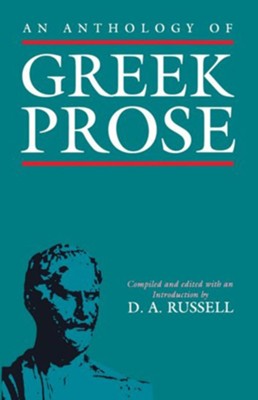 An Anthology of Greek Prose

▼▲
This anthology fills a gap which has been widely felt. It gives students--at sixth-form, undergraduate or junior graduate level--the opportunity of sampling a very wide variety of Greek prose texts, chosen to illustrate both development and generic differences. Each of the 100 passages is accompanied by a short introduction, and there are brief notes explaining difficult words and drawing attention to linguistic and stylistic points occurring in the extracts. Full references to grammars are given and the texts are supplemented with a useful general introduction as well as indexes of words and of grammatical and stylistic features. The extracts cover the entire range from the fifth century BC to the fifth centruy AD: Herodotus, Thucydides, and other historians; orators from Andocides to Demosthenes; philosophers such as Plato and Aristotle; and many writers from the Hellenistic and Roman periods (including some biblical and other Greek Christian texts). Care has been taken to choose pieces of interesting content, so that the book can serve as a reader to stimulate interest in Greek culture generally.

▼▲
This anthology presents over fifty extracts representing all the major Greek prose writers from the fifth century B.C. through to the fourth century A.D.: Herodotus, Thucydides, Lysias, Isocrates, Plato, Xenophon, Aristotle, writers from the Hellenistic and Roman periods (including some New
Testament and other Greek Christian writers), and many others. Introducing a broad range of style and syntax, the passages are accompanied by explanatory notes, full references to grammar, a useful introduction, and grammatical and stylistic indexes. The only anthology of its kind, this book will
be an essential guide for both students and teachers of Greek literary appreciation and prose composition.

▼▲
"I'm looking forward to using this work with my advanced Greek students next semester. It should provide a valuable introduction to Greek literature and also to history, philosophy, etc."--James M. Heath, Bucknell University
"Certainly the best anthology of Greek prose now available."--Robert J. Edgeworth, Louisiana State University
"Excellent reader to accompany any second-year+ Greek reading course. Especially useful for its illustration of styles in Ancient Greek over time and through different genres."--Dirk Obbink, Barnard College
"Includes generous samples of every type of Greek prose writing from the early mythographers through the Christian fathers of late antiquity....An indispensable asset to any course in advanced Greek prose composition and stylistics."--Bruce Heiden, Ohio State University
"Russell is adept at pinpointing stylistic features and concisely characterizing the manner of a passage....With a knowledgeable and judicious instructor...it could serve as an excellent...text for a beginning graduate survey or even for a mixed class of graduates and advanced undergraduates....All
will come away with an increased awareness of style and an appreciation of the continuing vitality of ancient Greek prose in the frequently neglected Roman period."--New England Classical Newsletter & Journal

▼▲
I'm the author/artist and I want to review An Anthology of Greek Prose.
Back