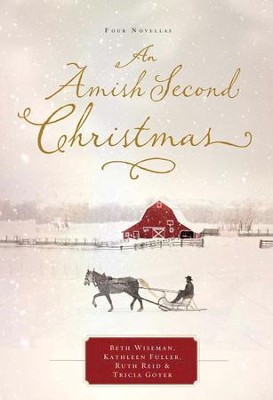 ▼▲
When Christmas Comes Again - by Beth Wiseman
Katherine Zook and her four children are facing their first Christmas without a loved one, and the future seems dim. But when a mysterious Englisch man begins to show up in the most unlikely of places, Katherine can't help but be suspicious . . . and a bit curious.

When Joy Stolzfus's boyfriend tells her he wants to court other women, she's shocked. She pours her heart out in a letter, but it mistakenly reaches Noah Esh. The two begin writing letters back and forth, but a misunderstanding threatens to topple the relationship they're building.

Anne Marie Smucker's life is pretty perfect. Until she discovers her widowed mother is getting married and they're all moving. On top of that, Anne Marie's relationship with her friend Nathaniel has changed, and she's more confused than ever about her feelings for him.

Esther Glick bakes a Christmas pie for a fundraiser, and she soon finds herself sitting across from bachelor Ammon Schwartz. Esther receives many orders for pies, but when she breaks her wrist, she discovers what community-and love-are all about.

A Gift for Anne MarieAnne Marie Smucker's life is pretty perfect. Until she discovers her widowed mother is getting married and they're all moving. On top of that, Anne Marie's relationship with her friend Nathaniel has changed, and she's more confused than ever about her feelings for him.

Katherine knows the first Christmas without Elias will be hard for her and the children. But when a mysterious Englischer appears with photographs of her late husband, Katherine  begins to wonder what other blessings Christmas could have in store.

Joy was expecting a wedding proposal from Henry; what she got instead was news of another woman. But when her heartfelt letter to a cousin ends up in the hands of a young cabinetmaker, an unexpected correspondence between two strangers gets interesting fast.

"A Gift for Anne Marie" by Kathleen Fuller

Anne Marie and Nathaniel have been best friends since they were kids. Now things are evolving . . . in ways everyone else predicted long ago. But when her mother suddenly decides to remarry in another state, Anne Marie’s new chapter with Nathaniel looks doomed to end before it begins.

"The Christmas Aprons" by Tricia Goyer

Vanilla crumb pie has been Esther’s mem’s calling card for decades. But when Esther finally gets her hands on the secret recipe, she discovers that vanilla crumb pie is more than just dessert . . . it’s bachelor bait.

Tricia Goyeris a busy mom of ten, doting grandma, and wife to John. A USA Today bestselling author, Tricia has published seventy books and is a two-time Carol Award winner, as well as a Christy and ECPA Award Finalist. She won the Retailer’' Best Award in 2015 and has received starred reviews from Romantic Times and Publishers Weekly. She is also on the blogging team at TheBetterMom.com and other homeschooling and Christian sites. Tricia is the founder of Hope Pregnancy Ministries and currently leads a teen MOPS Group in Little Rock, Arkansas.

▼▲
“This lively collection by four authors brings contrasts and changes to the reader as we learn about the simple life . . . An Amish Second Christmas will keep you smiling and baking at any time of the year. Enjoy this engaging read.” ---FreshFiction.com
“Four stories, four authors, one common thread: Christmas-themed plots. Characters in each story are sweet, kind and caring. They are looking forward to spending time with family and friends as they celebrate the holiday season. Each author brings a separate writing style, creating a cozy holiday collection.” – RT Book Reviews, 4 stars

▼▲
I'm the author/artist and I want to review An Amish Second Christmas - eBook.
Back
×
Back
×